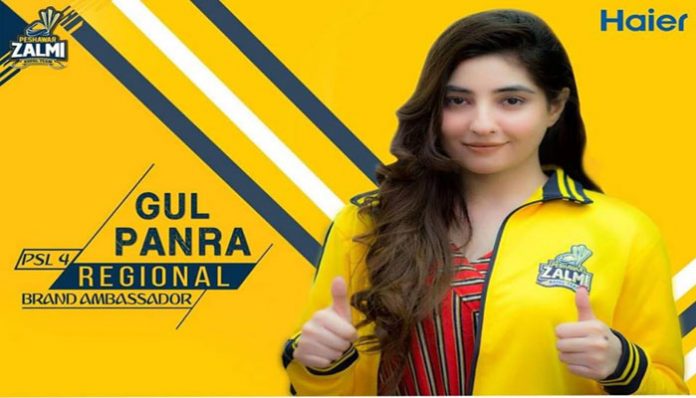 PESHAWAR: Peshawar Zalmi has appointed popular Pashto singer Gul Panra as regional brand ambassador for the franchise, Zalmi Foundation and Global Zalmi for the fourth edition of the of the Pakistan Super League (PSL).

“On public demand the youth sensation Singer/Brand Ambassador Gul Panra will be supporting your favourite cricket team #PeshawarZalmi Join us to grow the team this year,” he wrote.

It is a matter of felicity for the whole KP that the famed artist, Gul panra has joined @PeshawarZalmi ,@ZalmiGlobal & @FoundationZalmi as regional brand ambassador for the upcoming @thePSLt20 4. We, welcome her amicably to the Zalmi Family. pic.twitter.com/8WUV8VbQwK

Young Pashto singer Gul Panra is followed by millions of Pashto music lovers in Khyber Pakhtunkhwa and Afghanistan as well as in Punjab, Balochistan and abroad. She got more fame after her duet with Atif Aslam in Coke Studio Pakistan (Season 8). She had sung a song for the Peshawar Zalmi in the first season of the PSL and she is expected to sing another song for the team soon.

Javed Afridi said Gul Panra will also be a part of women empowerment activities led by the Zalmi Foundation.

Gul Panra said she was delighted to join Peshawar Zalmi.

“I am sure that the team will perform brilliantly in Season 4 and win the support of Zalmi fans,” she said in a tweet.

In an earlier interview, Javed Afridi said the time is not far when all the matches of the PSL will be hosted in Pakistan. The fourth edition of the mega event will start on 14 February and conclude on 17 March. The initial matches of the PSL-4 will be held in Dubai, Sharjah and Abu Dhabi in the UAE leg, after which the Lahore and Karachi will host the last eight matches.

Javed Afridi said his team aims to promote a softer image of Pakistan and bring international cricket back to the country.

Meanwhile, Information Minister Fawad Chaudhry said that the government is making efforts to shift PSL to Pakistan. In a statement, the minister said he hopes the upcoming edition of the PSL would be the last one to be played in the UAE.