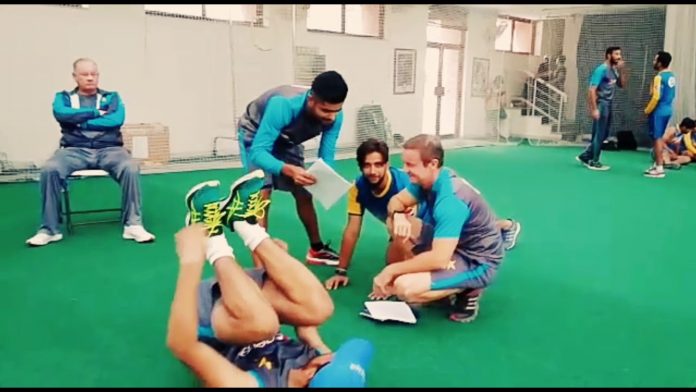 PESHAWAR: Amid increasing suspense as to who will finally make it to the World Cup squad, the Pakistan Cricket Board (PCB) has initiated a stern two-day fitness test for the 23 probables.

Yo-Yo test was conducted of all probables after which it emerged that in-form batsman Abid Ali and flamboyant all-rounder Imad Wasim failed these tests, which has put the team management in a difficult situate as they had made it clear that the fitness tests must be passed for inclusion in the World Cup squad.

A good news for Pakistan was that all-rounder Mohammad Hafeez passed the test which means that the top-order headache of Pakistan will reduce to some extent and they will get an experienced campaigner at the top.

Except for Imad Wasim and Abid Ali, all the other players passed the tests by reaching or clearing the required 17.4 points base in the Yo-Yo test. Although Imad is continuously performing well for the team, but his recurring knee problem his hindering him again. On the other hand, Abid Ali has failed the test which will be a big disadvantage for his World Cup dream. If Imad misses out on the list of World Cup squad, then left-arm spin batting all-rounder Muhammad Nawaz may get the chance as he cleared the fitness test on Monday.

Sources said Mohammad Rizwan was the top-scorer in the fitness test with 20 marks, while Hasan Ali and Shan Masood also performed brilliantly. Captain Sarfraz Ahmed and Mohammad Aamir also passed the test. Aamir is now a days under pressure to retain his spot in the team due to his not-so-impressive form recently. Also indications are strong that the PCB will still show faith in him, especially after he passed the fitness test, but there is a debate raging on whether he should be in the World Cup squad after taking just five wickets in his 14 ODIs since the 2017 Champions Trophy. In his last nine ODIs, Aamir has just got three wickets.

The national selectors didn’t bother to call up either of the two batsmen, Umar Akmal and Ahmed Shehzad nor left-arm fast bowler Wahab Riaz for the tests despite their impressive performances in the just concluded Pakistan Cup national one-day tournament in Rawalpindi.

Chief Selector Inzamam-ul-Haq will announce the 15-member squad for the mega event on 18 April.