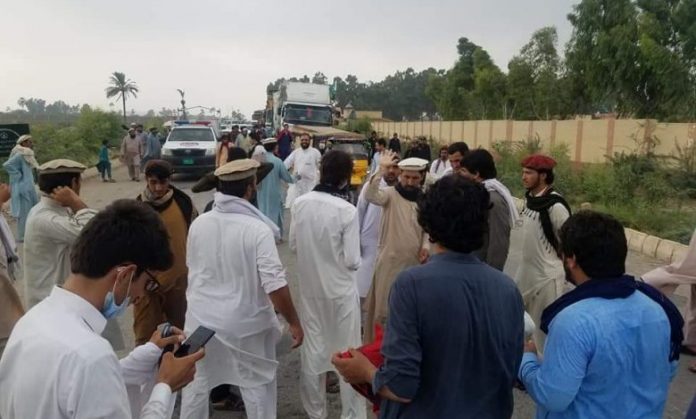 MIRANSHAH: The residents of Haiderkhel village of North Waziristan tribal district on Wednesday held a protest demonstration against disconnection of power supply.

The protesters blocked the Bannu-Miranshah Highway for all kinds of traffic for some time due to which the commuters and transporters faced difficulties in the hot weather.

Senior leader of Youth of Waziristan, who also participated in the protest, said the Wapda authorities have not restored power supply of Haiderkhel village several months after its disconnection. He said several Jirgas were held with Wapda officials in this regard, but no positive outcome was witnessed.

Local sources said Haiderkhel village was earlier receiving electricity from Grid-33, but that was disconnected on the pretext of overloading. However, Wapda has not provided electricity to the village from any alternative source, due to which the villagers are facing difficulties.

Bezar Khan, a local resident, said while talking to TNN that the villagers are having a difficult time without electricity. He said several meetings were held by the local elders with concerned officials for resolution of the problem, but no solution was found. He alleged that some Wapda officials are not serious for resolution of this problem.

Bezar Khan said the villagers were left with no other option, but to hold protest as their complaints are going unheard. He said the local residents, particularly the elderly people, women and children, who stay indoors most of the time, are suffering a lot due to lack of electricity, while the complaints of the villagers are falling on deaf ears. He said the protest will intensify if the problem remained unresolved.

Hidayat, another resident of the village, told TNN that the area people face difficulties in carrying out routine tasks due to lack of electricity. He said the Wapda officials have brought power transformers, but these are not being installed for unknown reasons.

He demanded the government and Wapda to restore the electricity of the village without further delay. He said in case of further delay in restoration of electricity, the area residents will stage a sit-in in Peshawar which will continue till acceptance of their demands.