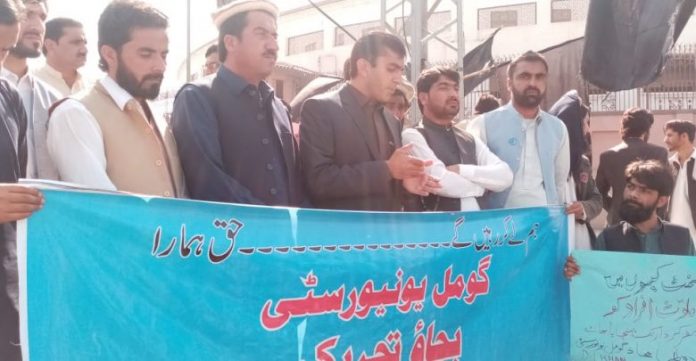 PESHAWAR: The protest of the students of Gomal University Dera Ismail Khan led by the Muttahida Tulaba Mahaz in favour of their demands is continuing for the last four days.

The representatives of student bodies and students are participating in the protest camp. The protesting students are of the view that proper action has not been taken against staff members involvement in harassment cases under the report of the Governor’s Inspection Team. They said harassers are still occupying important posts in the university which is unacceptable.

The students said fees in different heads have been increased manifold which is a conspiracy to push the university into unrest. They demanded immediate reversal in fee increase and strict action against staff involved in harassment of students.

The students of Gomal University DI Khan have set up a protest camp outside Peshawar Press Club for acceptance of their demands for the last four days. They are demanding reversal of hike in tuition and hostel fees, appointment of a permanent vice-chancellor and strict action against staff members involvement in harassment of students. The students are also demanding increase in the number of buses for transportation, action against fake degree holders, illegal appointments and other irregularities in the administrative system of the university. They threatened to hold a march towards Islamabad if their demands were not fulfilled.

Last week, the director of Linguistics Department at Gomal University, Professor Hafiz Salahuddin was forced to resign over harassment of female students. He reportedly accepted his guilt before the probe committee. Sources said some harassment cases in the university are under probe and some staff members have been expelled on these charges.