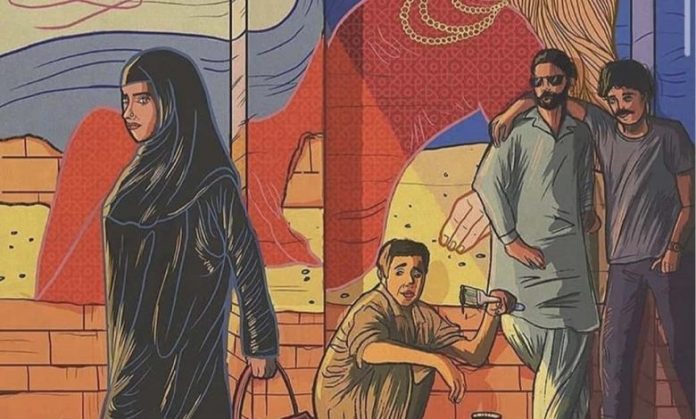 PESHAWAR: Harassment of women is common everywhere, but Rehana from Peshawar was shocked beyond measure when one day she faced harassment from a man of her grandfather’s age.

“I was going to school with my sister when an elderly man asked his grandson: See your grandmother is going,” says Rehana (supposed name), who is a schoolteacher in Peshawar and has to deal with such taunts almost on daily basis.

She was really shocked with the attitude of the elderly man towards women and it was a clear indicator as to what to expect from young men when women step out of their homes.

Can’t disclose it at home

Rehana says she could not respond to such taunts and can’t disclose this at home because it can further complicate the situation. She says a boy used to follow her every day when she was a college student, but she couldn’t tell anyone at home due to fear of being dropped out of college.

According to section 509 of Pakistan Penal Code, a man can face three years imprisonment or fine or both for using inappropriate language or behaves in an abusive way with a woman.

Several other women like Rehana who go out of home for education, job or any other work face harassment on daily basis.

Saira Mufti, an NGO worker in Peshawar, says women face harassment in offices, markets, public transport and also while walking on roads and streets. She says the most embarrassing situation comes when women wait for public transport on road and car drivers invite such women to their cars.

Harassment is a punishable crime

Provincial Ombudsperson for Harassment against Women Rakhshanda Naz says a man can be booked if he is caught following a woman. She says an awareness campaign in this regard was also carried out in Peshawar last year in which banners were displayed in the whole city with messages that teasing women, following them or using inappropriate words for them are punishable crimes. She says the same campaign was also carried out at BRT stations. She says knowledge centres are being established at three major bus stands where women can lodge harassment complaints.

Saira Mufti says the number of traffic policewomen must be increased so that they could help women facing harassment at roads.

She told TNN that she patrols the city area almost on daily basis and keeps an eye on negative elements. She says she also runs awareness campaigns in schools and colleges about harassment issue. She says traffic police also patrols roads at school closing time to keep an eye on harassers.

Rakhshanda Naz says the patrolling of traffic police was started over complaints of harassment at school closing time. She says girls can submit application at her office if they can recognise the harasser. She says the Ombudsperson office would take strict action over all harassment complaints.