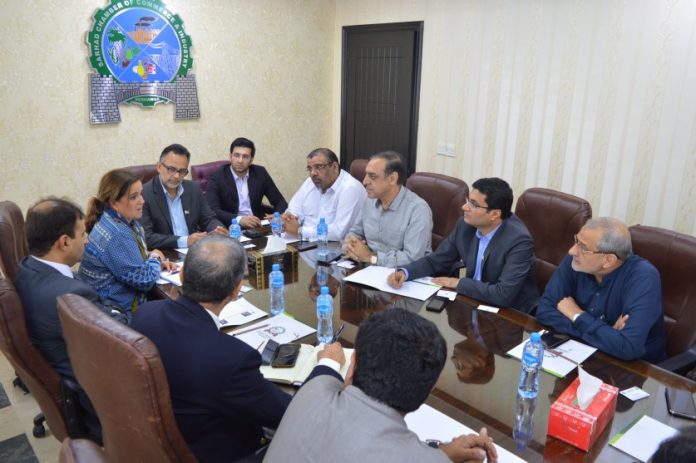 PESHAWAR: Resident Representative of International Monetary Fund (IMF), Pakistan Office, Ms Maria Teresa Daban Sanchez has claimed that the harsh budgetary measures taken by the government of Pakistan in the budget for the fiscal year 2019-20, are not part of the IMF fresh financial bailout package.

Speaking at a meeting at the Sarhad Chamber of Commerce and Industry (SCCI), Teresa Sanchez said that IMF is extending $ 6billion, the Extended Fund Facility (EFF) Program on request of the government of Pakistan. However, she said that the government’s reforms initiatives are imperative for sustainable economic growth and development of the country.

The IMF resident representative, Ms Teresa Daban Sanchez was accompanied by senior economist Zafar Hayat and M. Ali. At SCCI she held a meeting with SCCI president Faiz Muhammad Faizi, businessmen and other office bearers of the chamber.

Faiz Muhammad Faizi while chairing the meeting said if the business community was taken into confidence by IMF before approval of the fresh bailout package of $6 billion then it would be beneficial for the country’s economy.

SCCI chief said that Pakistan’s economy is passing through a critical phase of its history for which foreign lending or financial package like IMF is essential to bring back the economy on right track. He expressed the hope that the IMF bailout package would bring economic prosperity and development in the country.

Similarly, he said Khyber Pakhtunkhwa trade is mostly related with Afghanistan and Central Asian Republic countries. He said the continuous devaluation of Pakistan rupee against US dollar is badly affecting businesses and trade activities as well as an export with neighbouring states.

He said that the government’s harsh budgetary measures have also multiplied miseries of the business community. He suggested the government to introduce the fixed-tax system in the country. He stressed that instead of the imposition of new taxes on existing taxpayers, the government should bring new people under the tax-net.

Sanchez has agreed with recommendations of SCCI and said that the IMF bailout package a holistic one which will bring economic stability and prosperity in Pakistan and will accelerate economic and trade activities.