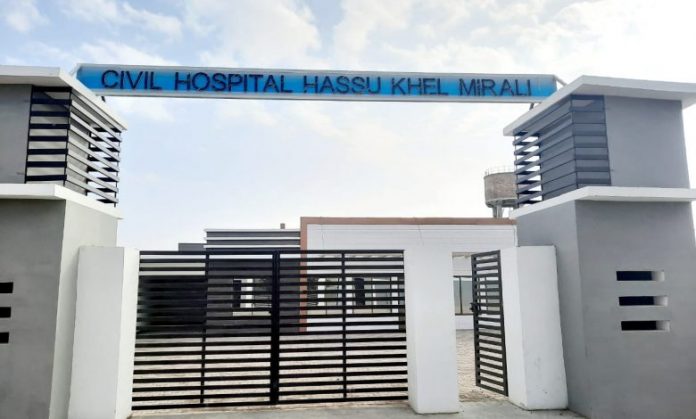 MIRANSHAH: Hassukhel Civil Hospital in Mir Ali tehsil of North Waziristan tribal district, which was closed during military operation Zarb-e-Azb, has been reopened for treatment of patients.

Local sources said Civil Hospital Hassukhel was established in 1964, but it was completely destroyed during military operation Zarb-e-Azb. People of Hassukhel, Mulagan, Umarki Kala, Barokhel, Khushali and Haiderkhel were compelled to go to Tehsil Headquarters Hospital Mir Ali, District Headquarters Hospital Miranshah or health facilities in Bannu for treatment due to lack of hospital in their own area. About 50,000 population of these areas was facing many difficulties due to lack of healthcare facilities.

In 2017, when the local people came back after life of displacement, Hassukhel Hospital was non-functional. The returning displaced persons were already facing difficulties in shape of lack of facilities and damages to their homes and properties, while they faced added trouble when they found that the local hospital was non-functional. Keeping in view the difficulties of people, the government released funds for the hospital in 2019, it was reconstructed, and opened for public. After reopening of Hassukhel Hospital, a large number of patients are coming again on daily basis.

Hospital in-charge Dr Falak Niaz said while talking to TNN that two doctors, one medical superintendent and 10 members of paramedical staff are currently performing duties in Hassukhel Hospital. He said the hospital provides facilities of medical store, testing laboratory and dental care system. He said the facilities of lady doctors, x-ray system, residential quarters for staff coming from other areas, emergency ward, drainage and others are still lacking in the hospital which need to be provided on priority basis.

People of the area have welcomed the reopening of Hassukhel Hospital, saying that it has reduced their difficulties to a great extent. They said the local hospital has saved their travelling and treatment expenses and now they have healthcare facilities at their doorsteps. However, they said the situation is a bit difficult for women patients because there is no lady doctor in the hospital. They demanded the concerned authorities to appoint lady doctors at the hospital on priority basis.