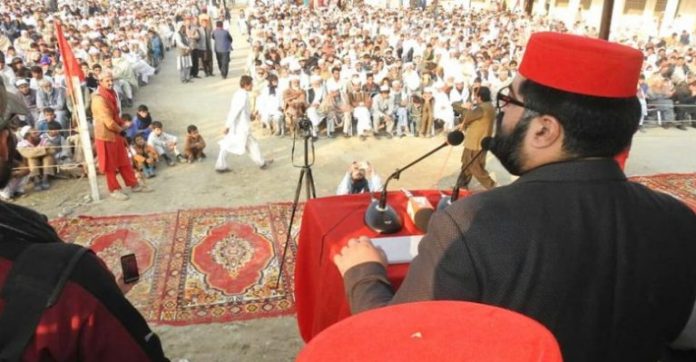 PESHAWAR: Adviser to Khyber Pakhtunkhwa Chief Minister on Elementary and Secondary Education (ESED) Ziaullah Bangash has suspended the headmaster for allowing a political rally at his school in Bannu.

On the directions of Ziaullah Bangash, headmaster of Government High School Sero Budakhel Muhammad Javed has been suspended over allowing the rally of the Awami National Party (ANP) provincial president Aimal Wali Khan in the school.

The CM’s adviser said in a statement that the political rally of Aimal Wali Khan at the government school was a condemnable act. He alleged that the ANP also used education sector for political purposes in the past and it repeated the same practice again in Bannu. He further alleged that the ANP is known for making political appointments in the Education Department and making records of corrupt practices which pushed the education sector at the verge of destruction. Ziaullah Bangash further mocked the ANP central and Bannu leadership by sarcastically offering to provide funds, space and even PTI workers for helping the ANP to arrange rallies if they have run out of money or they have lost their jobs.

In his address in Bannu on Thursday, Aimal Wali Khan had stated that unrest was created on the soil of Pakhtuns under a conspiracy. He said those who could not tolerate the prosperity and development of the Pakhtuns were behind creating problems for them. He urged the need of unity among Pakhtunhs for their rights. He had also criticised the KP government over not announcing local government election.

During the Bannu visit, Aimal Wali Khan was also stopped by the authorities from meeting the temporarily displaced persons (TDPs) at Bakakhel camp. He strongly criticised the authorities and said he was denied his right to meeting the TDPs to know their problems. He said no one was allowed to meet the TDPs at the camp.