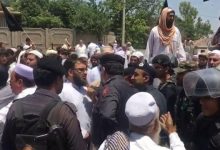 PESHAWAR: Employees of Health Department at Fata Secretariat on Tuesday staged a protest demonstration against nonpayment of salaries.

The protesters burnt tyres on Warsak Road and blocked it for traffic for half an hour causing massive traffic jam on one of the city’s busiest roads.

They alleged that high authorities’ involvement in corruption has caused funds shortage due to which their salaries were stopped, adding that nonpayment of salaries have forced their families to starve.

“We have neither pay fee of our children nor fulfill daily needs of our families,” said Azhar Khan, one of the employees.

They appealed Governor Khyber Pakhtunkhwa Shah Farman and Chief Minister Mehmud Khan to take notice of the issue and order payment of their salaries.

Director Information Fata secreteriat Abdus Salam said since Health and Education departments had been  handed over to Government of Khyber Pakhtunkhwa after merger of tribal areas, their salaries must be released by KP government.