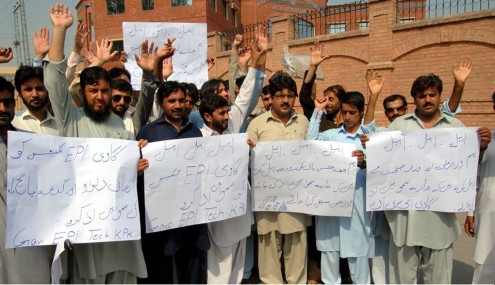 At a rally in front of the Peshawar Press Club, the protesters said they were providing maternity care services in all major hospitals and Basic Health Units of the province and providing safety injections to hundreds of women and children on a daily basis.

They said they also worked in polio and measles campaigns but that even then the government was not paying them their salaries for the last six months.

“Our salaries have been stopped for the last six months. We have got help from the volunteers and those volunteers are demanding their wages and keep on visiting our offices. We hail from an underprivileged class and appeal to chief minister to release our salaries,” said one of the speakers.

Director of EPI, Mr Tahir Nadeem, said the federal government had not released their salaries and that they would pay the technicians their salaries as soon as they got the same from authorities.