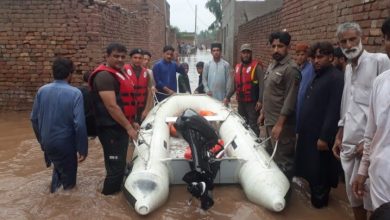 In some areas, people were forced to take shelter on roofs of their houses, unable to shift their luggage to safer places.

The rescue teams are busy in shifting the people from flood-hit areas to safe plceas. Rain water also entered houses and shops in Pabbi. Peshawar too received heavy rain where low-lying areas were inundated.