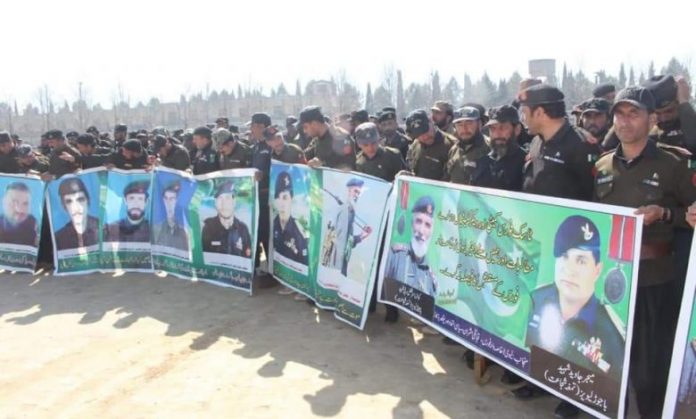 Aqeel Khan, a Bajaur Levies official was martyred along with several colleagues and passersby in a suicide attack in Khar on January 30, 2010.

Mr Khan was the sole bread winner of his family and his family fallen on hard times soon after his death. Iqbal Hussain, elder son of martyred official told TNN that he worked as daily wager, laborer and operated a push cart to make ends meet after his father death. “I had to take out my siblings out of private school and enrolled them into government schools,” he said.

Mr Hussain said that they even do not have money to pay for groceries.

He said that he and 40 other heirs of martyr levies personnel were deprived of Shuhada Package of their parents.

Mr Hussain said that government had promised to give levies force personnel similar perks  as KP police at the time of levies absorption into police. However, we are hearing the same promises time and again over past three years, he said.

“I visited district police officer (DPO) Bajaur office asking for help with payment of my bachelors Rs 10,000 admission fee,” he said. However, the as per the routine, the DPO asked me to write an application. “I write application every time, I need help, but nothings come out of them,” Mr Hussain said.

He said that if the government had ensure payment of his father salary to his family or provided employment to him, he would not have to go from pillar to post to make end meets.

What govt has to say on the subject?

DPO Bajaur Abdul Samad Khan said that police department has dispatched a note for appointment of 300 police personnel across the merged districts to relevant officials. “Only heirs of martyr personnel will be employed on 300 posts by the end of February,” he said.

Mr Khan said that currently 40 heirs of martyrs have to get government jobs in Bajaur and he has special case for their appointment with the high ups.

He said that those children who are ineligible for appointment as police constable will be accommodated on class IV and other vacancies.

Mr Khan said he started special introductory cards for martyr’s heirs to save them of trouble in government offices. “District administration had planted Australian olives trees in the name of levies personnel in Civil Colony Khar,” he said. Mr Khan added that income from this plantation will also go to the heirs of levies personnel.

On the other hand, Levies Merger Committee spokesperson Hawaldar Habibullah also complained about broken promises. He said that the Sartaj Aziz committee on Fata merger had proposed to hire 18,000 police personnel across Fata..

Mr Habibullah said that government should have hired martyrs heirs among 241 appointments of the constables. However, he added that authorities failed to hire the ward of the martyrs among them.