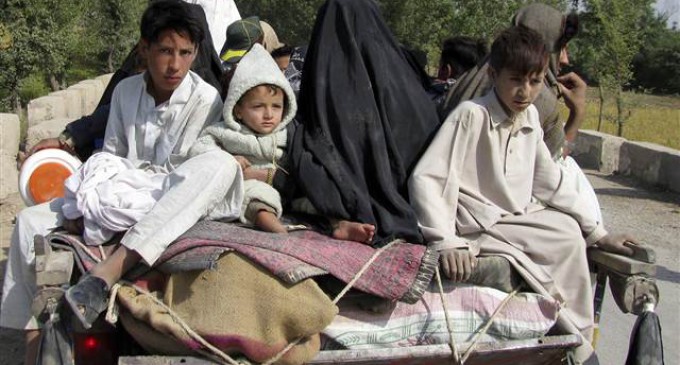 KABUL, Afghanistan – Tawoos Khan remembered his president’s visit like it was yesterday.

As he stood in front of a photograph of Afghan president Ashraf Ghani, who visited his home in Afghanistan’s Charahi Qambar internal displacement camp a few years ago, a mixture of pride and disappointment lined his face.

“Ghani Sahib promised that he will donate the land to me, but it was a not a real promise,” he said, referring to the president. In the absence of formal land rights, Tawoos and hundreds of others living at the camp are considered informal residents or, worse, squatters.

Tawoos is the titular head of the camp that lies on the outskirts of Kabul. Nicknamed Helmandi, it is eponymous with the Afghan province from which he and the other residents hail.

“We are farmers who till others’ land. We never had our own property, so now we have nothing to go back to,” Tawoos explained.

During an August visit to the camp, Tawoos ushered me into the settlement of mud houses that were meant to serve as temporary shelters but have now lasted more than 20 years. It has become home to civilians fleeing different invasions – from the Soviets to the Taliban and the U.S.

Such informal settlements have become ubiquitous in Afghanistan, especially in urban areas.

Chronic conflict in Afghanistan has created over 1.5 million internally displaced persons (IDPs) in the country. Over 600,000 of them were newly displaced in 2016 due to renewed violence. Displacement has accelerated in the past year, due to instability in an increasing number of Afghanistan’s 34 provinces.

The Special Inspector General for Afghanistan Reconstruction (SIGAR), a U.S. government auditor, has acknowledged the expanding Taliban hold over the country. About 60 percent of the country is under government control, while the remainder is under the Taliban’s sway or “contested,” according to SIGAR’s latest quarterly report.

As a result, civilians continue to flee to places such as Kabul in search of safety, stability and better livelihoods. Meanwhile, communities like Helmandi have become semipermanent ghettos, with little support for reintegration or the means to return home.

The general air of malaise and neglect has visibly impacted the youngest children of the camp, many of whom go without a consistent formal education. The newest generations at the camp were born cordoned off from mainstream society.

In Helmandi camp, several young boys gathered around me, one of them tugging at the strap of my camera, another disassembling the tripod. The elders sitting at their doorsteps hushed them away, hurling insults and then pebbles at the group. The boys retreated with disgruntled expressions but quickly resumed their daily chores, while regaling each other with banter.

Some pumped water, while others shoveled sand that would be used to build a new mud house. As they stood against the harsh rays of the early afternoon light, a fuel station behind them stood in stark contrast to their rudimentary homes. The people of Helmandi have lived “off-the-grid” for decades, with open sewers and a sporadic supply of water and power.

“Education does not mean anything when there are no teachers at school,” said Tawoos. Two of his four children – a daughter and a son – while away their hours in classrooms bereft of basic supplies, and their two years of schooling have yielded virtually no results, he said. Soon they will stop. “It is waste of their time; they are not learning anything,” Tawoos explained.

The conditions at Helmandi are not unusual in Afghanistan. The camp is a quintessential example of the most neglected neighborhoods in a country that ranked 169 out of 188 countries in the Human Development Index (HDI). Its highly impoverished residents have nowhere else to go.

Tawoos is scornful of the question of migrating to other countries. “We don’t have enough to eat. The last time we were provided with food assistance was in 2012 – a kilo of rice for each family that lives here,” he said.

His more timid neighbor, Mohammad Khan, led us into his home to introduce his family of ten – a wife, four daughters and two sons, with children of their own.

“My eldest daughter is 17 years old and she got married and her baby does not always have enough to eat,” he said, pointing to his daughter cradling her child in her lap.

There are many mouths to feed, and he is the primary breadwinner. His sons, who are all under 18 years old, struggle to find consistent work and have never been to a formal school. The women stay at home.

“If you interview the president, put in a good word for us, so the next kilo of rice does not take years to arrive,” Mohammed shouted after me, laughing.

Refugees Deeply will be hosting a Deeply Talks with experts at the Norwegian Refugee Council and Samuel Hall think-tank on September 27. To join us live or tweet/email your questions, please visit this link.

“We should be given agricultural land to continue their lives. The government needs to support us for two or three years, then we can stand on our own feet,” Tawoos interjected, offering what he said is a perfectly pragmatic solution. Mohammad nodded in agreement.