BLOG:Here Are The top Five Rules For Telling The Visual Story

I never had an opportunity to formally learn mobile reporting. But, I was under impression that it won’t be difficult because I’ve been using smart phone since 2009. However, I learned that it wasn’t as easier as I thought.

To be a mojo journalist, there are definitely rules that need to be followed until and unless you become a master of your own. But for beginners like me, there is no option other than to follow rules. Here are five important rules that I learned during the first day of the mojo training.

FIVE SHOTS RULE: This is the most basic rule to learn, as without it, you won’t be able to understand how and why the shots are done in a sequence.

1. WHAT SHOT:  What shot explains the action that you want to show and tell about further. This is a fundamental rule because it unfolds the story or in other words the story is based on it.  For instance, you want to cover a story about a character that is very good at making a local cuisine “Dam Pukh Gosht”. So you have to film him during the action, which is in this case cooking a dam pukh Gosht. The next thing about what shot is that it’s always a close-up shot, say, for about 9 seconds.

2. WHO SHOT: While the action is being taking place, as a viewer, you will be curious who is this man/woman that is cooking Dam Pukh. It’s now the time to introduce your character by showing his/her face. That’s why it is called WHO shot. This could be a closed shot.

3. WHERE SHOT:  After showing what is being cooked and who is cooking, it’s now time to show location of the action where the character is cooking Dam Pukh on steam. It is a wide shot explaining the environment in which the action is happening. This is a very important shot in a sequence that is being taken whenever, you tell a story about the character.

4. OVER THE SHOULDER (OTS) SHOT: Apart from the above three shots, you can also take OTS shot in order to diversify shots. It combines the What and Who shots in one shot.

5. CREATIVE SHOT: This is also known as WOW shot. Sometimes, you need to take a shot from above or below or with anything that could be cool to show about the character. The creative shot could be long or wide depending on the scene. Basically, it could be anything that adds a visual facet to your sequence; i.e. Close-up shot, Medium shot, uncommon / extreme camera angles, object in foreground, playing with depth of field, etc. as a reporter become creative but never lose link to the main character.                      These are five important shots you need to understand and apply during filming. And these shots altogether make a sequence and these shots can be repeated for another sequence.

2. 180-DEGREE RULE:  It is about two characters in the scene that should keep its right/left relationship in the scene. If they don’t keep right/left relationship then they have crossed the line and it could confuse the audience. This rule is also known as D rule because you can move inside the D, but you cannot cross the line to go out of D. Attached is the 180 Degree Rule. As explained in the diagram if your are standing in the green zone, you shouldn’t cross the line to enter red zone. You keep yourself in the green zone for all shots. 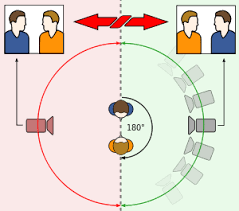 3. RULE OF THIRD: it’s very common feature that now a days comes in every smart phone where the photo screen is divided into 09 boxes, with two horizontal lines intersecting two vertical lines. If a character or object is photographed around those intersecting points it is considered catchy and prominent. Therefore, most scenes, we see in movies are always sitting on those four intersecting points. Attached is the screen grab of rule of third. 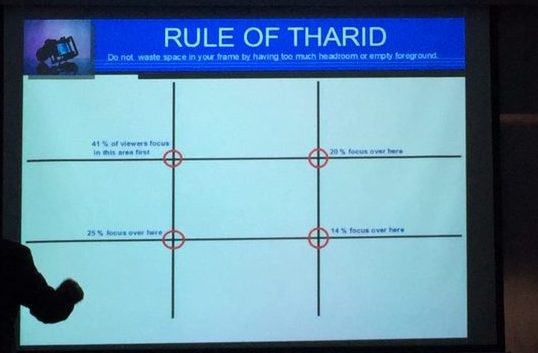 4. SHOT DURATION: It is recommended to take long enough shots that give you flexibility when editing the video (roughly 8-10 sec each shot). Cover the best moments of the action happening in front of your camera and if necessary, let the camera record it a little longer. Always think about your smartphone storage however. Don’t take shots with a very long duration as it might fill your storage quickly and as it creates large files which might cause problems for the apps on your smartphone handling these files.

5. STABILITY: One of the challenging situations for mojo journalism is to film character without shaking the recording. In order to meet that requirement there are devices and tools that can help with image stability. However, the best thing is to learn how to hold smart phone so that it don’t shake for few seconds. There are also many apps that also reduce a little bit shaking.

In the next blog, I will explain the identification of character and his/her challenge, which qualify the story for broadcast. In other to tell a moving story, we also need visualization, suspense curve, story focus, and emotions. So, see you in the next blog.