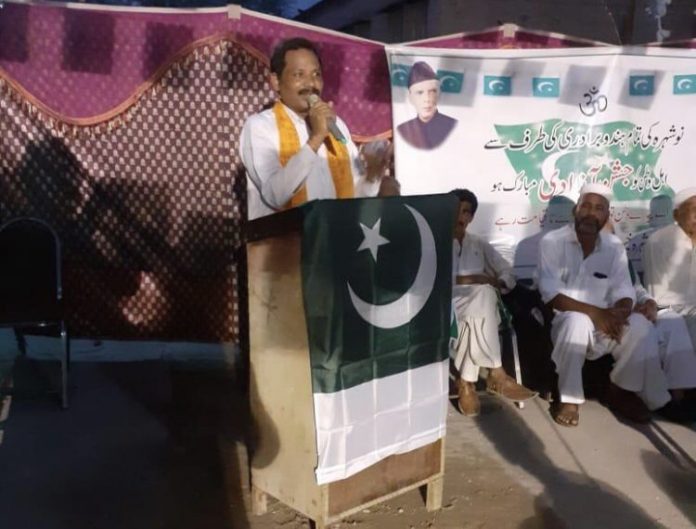 NOWSHERA: Hindu community in Nowshera observed August 15, Indian Independence day, as black day and vowed to extend all support to the Kashmiri people to achieve their right of self-determination.

The event was arranged at Raisalpur cantonment area where they chanted slogans in favour of Pakistan and Kashmiri people and said that Hindu in Pakistan will never lag behind in supporting the Kashmir cause.

The Hindu community elders said that the religious minorities have complete freedom in Pakistan and stand side by Side with Pakistan army for the defence of the country. They said that they’ve rejected Indian move on Kashmir and have a firm belief that the people of Kashmir should be given the right of Seles determination.

They asked the United Nations Organisation (UNO) should play an active role and stop Indian atrocities in Kashmir. The Hindu community also passed a unanimous resolution saying that they will always stand side by side with Pakistan army for the defence of the motherland.

In Bagram, Sikh Community staged protest rally to express solidarity with the people of Indian held Kashmir and asked the UNO to provide the people of Kashmir their right of self-determination. Dr Om Parkash Malhotra and Dr Balram Vijay were leading the rally. The rally was started from Main Bazaar to Kacheri Chowk and chanted slogans for Kashmir and Burned Indian flags.

In Mingora, Dedec Chairman Fazal Hakim and member National assembly Salim Ur Rahman, while addressing a gathering, strongly condemned human rights violations in Indian held Kashmir and said that they will stand side by side the armed forces to protect to provide the Kashmiri people with the right of self-determination. Civil society, political workers and local elders participated in the event. They also staged a rally and chanted slogans against the Indian government and asked UNO for the rights of Kashmiri people.

Traders in Khar Bazaar staged a rally against the Indian atrocities in IOK and observed the Indian Independence Day as a black day. The rally was led by Tehsil Dar Ajam Khan Afridi whole traders were represented by Nor Muhammad and Muhammadi Shah. The participants chanted slogans against the Indian government and burnt their flags.