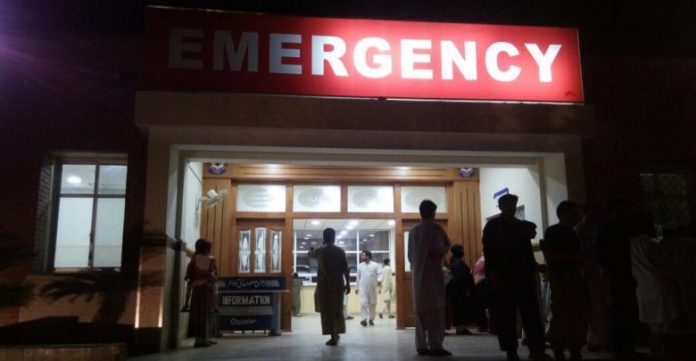 PESHAWAR: The administration of Hayatabad Medical Complex (HMC) has banned the admission and treatment of patients referred from other hospitals.

The hospital administration had to take this step due to increasing number of coronavirus patients due to which it has become difficult for it to handle patients referred from other hospitals. The HMC spokesman Tauheed Zulfiqar said the number of patients referred from other hospitals has increased enormously during the last few days which has put the administration in a difficult situation.

There are a total of 1,250 beds in HMC and 360 beds have been specified for coronavirus patients. The spokesman said 88 coronavirus patients are currently under treatment at the special ward and some of them are on ventilator. He said the influx of patients from other areas can put pressure on the facilities available for existing patients. There are a total of 44 ventilators in HMC and 12 of these are being used in intensive care unit (ICU).

The spokesman said a large number of patients are coming to HMC mainly because it is the first hospital in Khyber Pakhtunkhwa which is treating coronavirus patients through plasma donated by recovered patients.

The problem of referral of patients to the three main teaching hospitals of Peshawar from district and tehsil hospitals of other districts is lingering for quite some time. The provincial health officials have issued instructions to local hospitals several times to avoid referring such patients who can be treated at local hospitals. Continuous referral of patients has increased the burden of HMC, Lady Reading Hospital and Khyber Teaching Hospital and the respective administrations are finding it hard to handle the situation.

Adviser to CM on Local Government Kamran Bangash had recently directed doctors in his native Kohat district to immediately stop unnecessary referral of patients to Peshawar. However, Young Doctors Association had opposed his directions, arguing that the government can only issue such instructions after providing best treatment facilities in all district and tehsil level hospitals.

A senior doctor of KP’s largest hospital told TNN that not only the small hospitals, big teaching hospitals like the Mardan Medical Complex also refer patients to Peshawar, which is beyond comprehension. He said such referrals put burden on patients and hospitals.

The HMC spokesman said four patients have recovered after plasma treatment and others are improving well. He said four people have donated plasma to HMC so far and three of them are hospital employees.