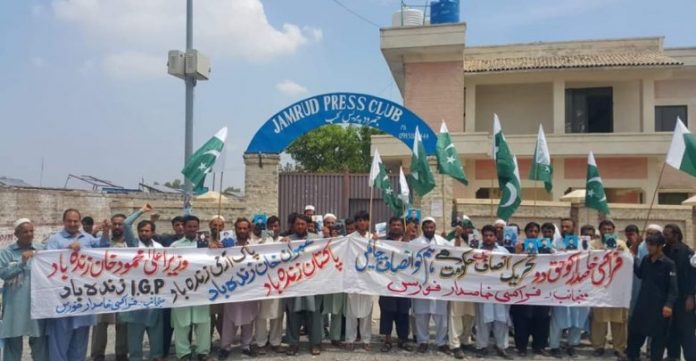 JAMRUD: The honorary Khassadar personnel in Khyber tribal district have called upon the government to also integrate them into Khyber Pakhtunkhwa Police on the pattern of Levies and Khassadar forces of tribal districts.

In this regard, the honorary Khassadars staged a protest demonstration outside Jamrud Press Club on Monday. Participants of the protest said they have also performed duties in extremely difficult circumstances in tribal districts along with Khassadars and Levies personnel. They said they have assisted the security forces well in tribal districts and performed their duties selflessly to ensure durable peace in the region.

The honorary Khassadars said about 800 personnel performed duties along with other security forces to ensure peace and security in the region and they have fought terrorists and other criminal elements with bravery. They said that despite challenging law and order situation, they always performed duties to provide security to polio vaccination teams in far off areas of merged districts and operations against miscreants. They said their 28 colleagues were martyred in the line of duty, while 28 others were injured.

The protesters said a huge development has occurred in shape of merger of erstwhile Fata with KP and Khassadar and Levies personnel have been integrated into KP Police. They said the honorary Khassadars must also be merged into KP Police to address their sense of deprivation. They said integration into KP Police will provide honorary Khassadars an honourable source of income and they will be able to support their families. They assured that they will perform their duties with even more dedication and will not hesitate from offering any sacrifice for the country if they got the police job.

Khassadar and Levies personnel were recently merged into KP Police by the provincial government and police ranks were awarded to personnel and officers of tribal forces according to their previous ranks.