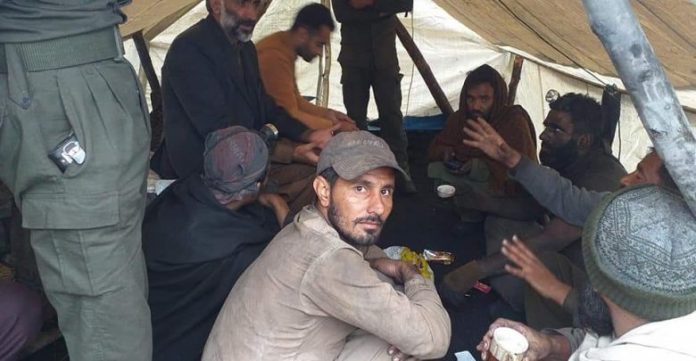 PESHAWAR: A few days ago, coal mine No. 41 Kala Khel in the tribal district of Khyber caught fire. When the fire was extinguished, Nek Mohammad along with three other labourers entered into the mine. But, again there was a fire, the rest of the workers went out, but then, unfortunately, Mohammed got stuck. Today is the ninth day of the tragic incident, but his relative is still awaiting his recovery.

At first, it was hoped that the Nek Mohammed would be brought back to life, but now his life expectancy has been dashed and the survivors are now waiting for the corpse, but its chances are also diminishing with each passing day.

When we approached Miraj Khan, brother of Nek Muhammad, who was trapped in a coal mine, he said that on the first day when the rescue personnel came here, they had no equipment and the whole day was passed in bringing oxygen cylinders and other equipment from Peshawar.

The attitude of the Inspector of Mining was also regrettable and was looking for excuses that the road to Mine was narrow. Engineer Miraj also appealed to the concerned agencies to file an FIR against them. According to local sources, crews were there for 6 nights under the open sky and a tent hardly arranged for them on the seventh day.

Ali Bash Khan, vice president of the Pakistan Central Mine Labor Federation Pakhtunkhwa, told TNN that it is regrettable that 5,000 tonnes of coal have been extracted from the same mine so far, but even after days, the body of Nek Mohammed couldn’t be taken out.

He added that still there is no official government rescue team arrived at the same, but rescue team of the coal mine is working to recover the dead body but they have a severe lack of resources and there is no emergency route for oxygen supply inside the mine.

There have been hundreds of such incidents before, but this time it is more tragic that the body is still trapped in the main. Nek Mohammad, who is trapped in the Kala Khel mine, belongs to District Shangla.

According to the Coal Mine Workers Welfare Association, which works for the rights of miners, most of the country’s coal workers, including Khyber Pakhtunkhwa, belong to Shangla. According to data from 2000 to 2018, more than 3,000 miners from Shangla were killed in similar accidents and several thousand have been disabled. This is the story of every other house in Shangla.