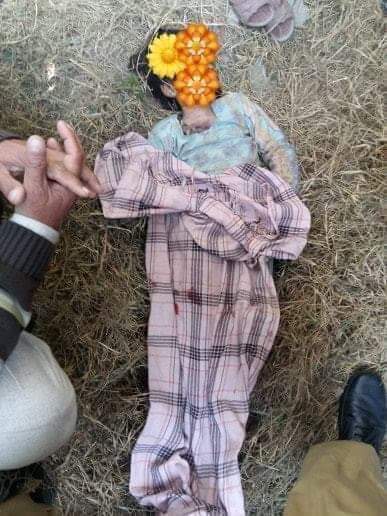 PESHAWAR: An eight-year-old girl was allegedly raped and tortured to death in Nowshera, days after another minor girl was brutally raped and murdered in Abbottabad district of the province, triggering a national outrage.

The Police said that the tortured dead body of the eight-year-old girl, Manahil was found in a graveyard on Kheshgi road, within the jurisdiction of Nowshera Kalan police station.

Police added the FIR has been registered on the complaint of the girl’s father, Shah Said against unknown persons while the dead body has been shifted to district headquarter hospital for post-mortem.

Though the medico-legal report of the eight-year-old girl has not yet released, however, her tortured body found on Friday suggests that she might have been raped before being brutally murdered.

The locals said that her head has been crushed with a heavy stone. After reporting the tragedy to Police, the District Police Officer (DPO) reached to the spot and assured the family that all efforts are being made to arrest the culprits.

Her father told the media persons that she got disappeared on Thursday and they have registered a case in the local police station, however, police have not helped them to find her daughter.

He said that her daughter was studying in class three in a private school. On that day, he added, as usual, she came to home from school and after some time left for a nearby religious seminary where she was learning Qur’an Shareef. however, she didn’t return.

“The principal of the religious seminary has sent Manahil along with another girl to her daughter’s home to deliver some foodstuff,” her father told media.

Since then, she is missing, said her father. “we have searched her all night, but we couldn’t find any clue,” he added. The grieved father said that it was in the morning when they were informed that Manahil’s dead body is lying in the graveyard.

The FIR has been registered against unknown persons in Nowshera Kalan Police station. The parents of the child said that they have no enmity with anyone, thus they have not nominated anyone in the FIR.

Chief minister Khyber-Pakhtunkhwa Mehmood Khan has taken notice of the brutal murder of the 8-year-old girl in Nowshera. He directed the inspector general of police to conduct a prompt investigation to take the culprits to justice.

The chief minister said that the killers of an innocent child do not deserve any leniency and ask the IGP to use all available resources to investigate the gruesome tragedy.

On the other hand, Pakistan Muslim league-Nawaz provincial spokesmen Ikhtiar Wali has termed the increasing crimes against children a failure of the Pakistan Tehreek-e-Insaf government. “The present government has failed to protects innocent children,” alleged Ikhtiyar Wali.He demanded the government to provide justice to the poor bereaved family of Nowshera.

According to statistics, in Pakistan during the last five years, 18000 children were sexually abused and killed. However, says the study, so far only 25 culprits were granted death sentence while 11 were imprisoned for life.