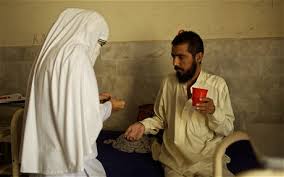 JAMRUD: A 60-bed hospital for treatment of drug addicts has been opened in Jamrud sub-division of Khyber tribal district.

The hospital has been established by a non-governmental organisation (NGO). A ceremony in this regard was organised on Sunday.

Addressing the ceremony, Dr Nabi Afridi, said the NGO has initiated practical step for rehabilitation of drug addicts in the area. He said drug addiction is a menace, however, its treatment is possible with a rehabilitation process. He said 10 patients have been initially admitted to the hospital. He said the hospital will work to pursue the mission eliminating the use of drugs.

The local people have appreciated the opening of hospital for drug addicts in Jamrud. They said many people have been trapped by the drug mafia and they are involved in this ugly practice. They said a drug hospital was direly needed in the area. They said the new hospital is free of cost treatment of drug addicts.