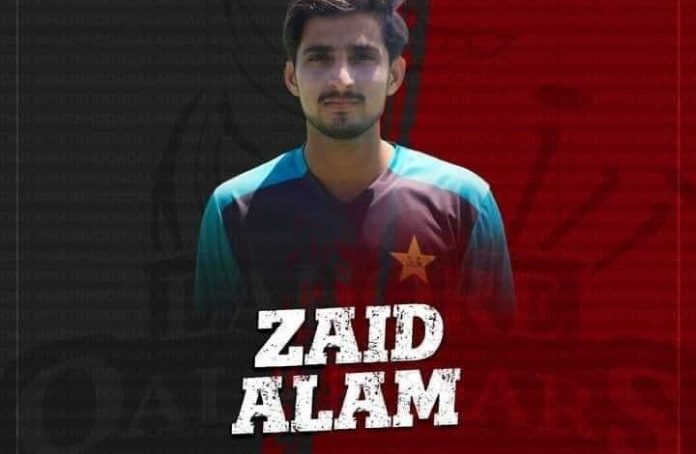 BUNER: Zaid Alam from Shangla district of Khyber Pakhtunkhwa has now become part of Lahore Qalandars, the Pakistan Super League (PSL) franchise which has unearthed talent from all parts of the country and contributed a lot towards development of cricket in Pakistan.

Zaid Alam originally hails from Choga union council of Shangla and his family is currently settled in Lahore as his father Alam Khan runs a tea hotel in Anarkali Bazaar for the last few years.

Zaid Alam also used to work in his father’s hotel and play cricket with tennis ball in the ground of Urdu Bazaar. A teacher in the Urdu Bazaar government school noticed Zaid Alam’s cricket passion and advised him to concentrate on his game as he had the potential to compete on the national and international level.

Zaid says he was lucky as he got full support, encouragement and appreciation from his father and brothers.

Zaid Alam first represented Pakistan in Under-19 Asia Cup and scored a 32-ball 50. Then he scored 128 runs in one-day series against Australia and was declared man of the series. He then played World Cup in 2017-18 and then played Nepal Premier League and scored four consecutive fifties for his team. He is representing Northern Eleven for the last two years.

The people of Shangla as well as Buner are jubilant over selection of Zaid Alam by Lahore Qalandars and congratulating his elder brother Muhammad Alam on social media. Muhamad Alam shared a post on social media in which he commented that Shangla and Buner are his first homes and Lahore is second home. Therefore, he said Zaid Alam will represent all these places where he lived and win hearts of fans.

Muhammad Alam told TNN that he is the happiest person on earth after coming to know about selection of his younger brother by Lahore Qalandars. He said he is extremely thankful to Almighty Allah and highly appreciates Lahore Qalandars for selecting the talented youth and giving them opportunity to shine on national and international level. He said he hopes his brother would be the next from Qalandars to join the national team.