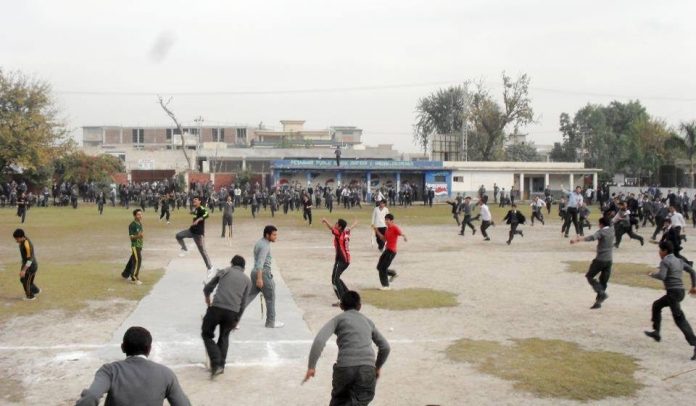 PESHAWAR: Nawaz at his printing shop used to enjoy live streaming of a local cricket match along with about 10,000 plus online viewers. It was a tough match; the supporters of both of the teams were commenting and appreciating their favourite team.

Nawaz was supporting Team Saleem-11 – a local team of the residents of Nahaqi, a village near Peshawar city – who was playing final against the Peshawar Lions at Aslam Dhairi. It was a local match which in the past, he used to watch on grounds of his village.

When asked, Nawaz replied that he has to run his shop and has no time but he doesn’t want to miss the game because his friends are playing in Saleem-11. He further said that he used to watch all the matches even the tournaments live on social media while performing his duty at the shop.

The social media page name “Khpal Page for Cricket Lovers” used to broadcast the live streaming of local cricket matches. The page has 11,837 likes, 16,811 followers, a number of appreciation reviews, and 10,000 plus viewers at a time from July 25th, 2019. The page is organized by a PhD Scholar in Finance Kashif Saleem. He is a resident of DI Khan, who initiated the idea to bring the local cricket on social media live. Kashif said that because of live streaming the local players of KP got recognition in all over Pakistan, by the social media has promoted players from a grass root level.

He furthered that some of the players got much fame which includes Shahid Dandamar; Dandamar is a Pashto slang used for the fastest batsman in sixes, Saleem Leftie; Leftie is specially used for the left-hand batsman, Sunny Pathan and much more. These players are usually invited by outstation teams and they properly hire them for tournaments.

He also added that the live streaming of a tournament was broadcasted in an area which is considered to be a conflict zone of Pakistan named “Barha” from which a message of peace and prosperity has spread in all over the country and internationally. He exclaimed with joy, that the page used to get messages of appreciation from Dubai and UAE which make them continue live streaming.

After getting fame the number of teams is increasing and taking a part in the tournaments. The initial teams included Saleem-11, Peshawar lions, Telah-11, Star-11, Baghi-11, and Marwat Zalmi. Because of the high number of visitors and views, by the announcement of the tournament the sponsors used to contact with the admins and in the result, the last final at Aslam Dhairi was awarded a motorbike to the winning team.

While talking to the social media expert Anees Takar about the social media marketing he replied that this is the medium which is easily accessible to everyone by just making an account and can visit with very low price packages. He further said that by using social media everyone is free to share their thoughts but here is the lack of censorship, every admin is the owner of his page and he can share all the posts he wants to. In the way of marketing and promotion, he said that social media is one of the best platforms for marketing.

Pointing to the live streaming of local cricket matches, he said, the local teams don’t have much budget to hire media specialists so the best initiative to make it live with mobile phones and let the people know the talent who use social media.

Many players got fame from this page, watching to the comments and fans of cricket appreciating them on the post are a clear example of their recognition. When asked one of the famous players Mr Saleem Khan replied that he feels more enthusiastic when he opens his inbox and sees the messages of fans from abroad. He further said, that before live streaming they have just been known in their village but after their matches have broadcasted live on social media the people from other provinces became their fans. When asked, he replied that he has been called several times outstation for a cricket tournament and the last match he played was in DIR.

Roundabout 73pc of the world is using social media and live streaming. It is one of the most visited tools of it by which people can reach and know about those areas where they have never been to. As KP is portrayed as the conflict zone in all over the world, this kind of live broadcasting is presenting a soft and peaceful image of our province.