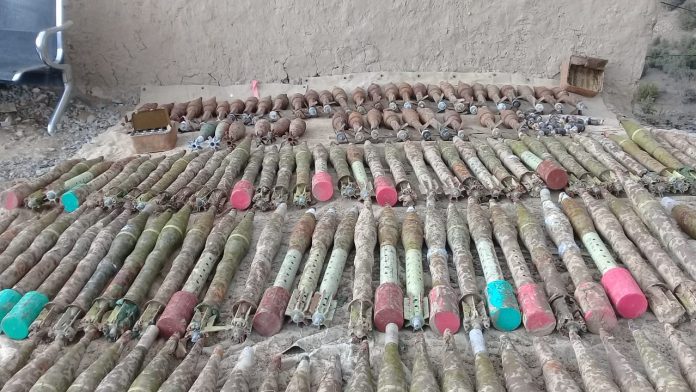 On a tip off, the security forces conducted search operation in in Goen area of Lower Orakzai and Chapar Mishti area of Central Orakzai. A huge cache of arms hidden under the ground was recovered during both raids.

Sources said 21 rocket-propelled grenades, 34 fuses, gun barrels, three missiles, four rocket launchers and hundreds of cartridges of various bores. No arrests were made during the raids.

The sources said the weapons could have been used in sabotage acts. The security forces foiled the plot by miscreants and saved the area from destruction.

No casualty was reported in the incident. However, Takhta Beg-Matani Road remained closed during the heavy firing. After long exchange of fire, the situation normalised. There were no reports about any action by the administration after the incident.

A man shot dead his sister-in-law over a domestic dispute in Mardan on Thursday.

TNN correspondent reported that the incident happened in Palond area of Katlang tehsil. The body of the slain woman was taken to Category-D Hospital in Katlang for post-mortem after which it was handed over to heirs.

Police said a case has been filed against Tajbar and his two sons on the report of daughter of the slain woman.

Meanwhile, six persons of a family were injured when roof of a house collapse due to gas cylinder explosion in Bara Banda area of Risalpur in Nowshera. The roof of two rooms and veranda of the house collapsed due to the impact of the explosion. The injured include two children and three women.

The Rescue 1122 personnel reached the spot and shifted the injured to Mardan Medical Complex.

The KP Food Safety and Halal Food Authority on Thursday conducted raids on godowns and production units of food outlets and recovered the fake cold drinks and rotten eggs.