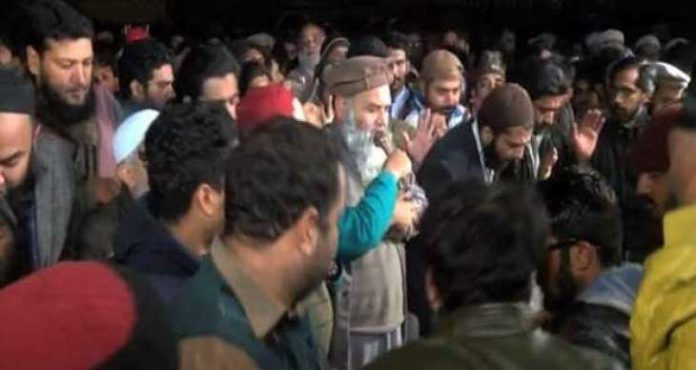 BANNU: Hundreds of people gathered in Landi Dak area of the district on Wednesday for the funerals of six persons of a family, including 4 children, who were killed in a ‘mortar shell’ explosion inside a home on Tuesday night.

The time to offer the last rituals of the family was fixed at 3 pm, however, due to heavy rain and the deteriorated conditions of the dead bodies, it was offered at 11 am. District Nazim, Bannu, government officials and other notables of the district participated and offered prayers for the eternal peace of the departed souls.

Six members of a family were killed in the explosion inside a house in Land Dak area in Bannu on Tuesday night. Police said the explosion was caused due to a ‘mortal shell’ that was laying in their home.

Due to the blast, Barkat Ullah, a school teacher, his 35-year old wife Farhad Bibi, 18-year-old son Kalim Ullah, another 16-year-old Fahim Ullah, their 8-year-old Basna Babi, and their 3-year-old minor son Farid Ullah.  The Police have collected all evidence which will be examined in the laboratory to determine.

The ill-fated family left behind two children. The people were coming to victims’ family residence for offering Fateha for departed souls. The explosion of and the killing of a whole family has put the whole district grief.  They asked the government to provide the two remaining children financial support and should take the responsibility of their look after.

MIRALI: A Tribal elder, Malik Remal Khan Wazir and his son were injured in a remote control blast in Marsi Khel area on Wednesday. According to official sources, his vehicle was the target of the blast. He was on the way back to home after a meeting with Deputy Commissioner, North Waziristan about the Khaisor village issue. Malik Remal Khan was also targeted twice in the past.