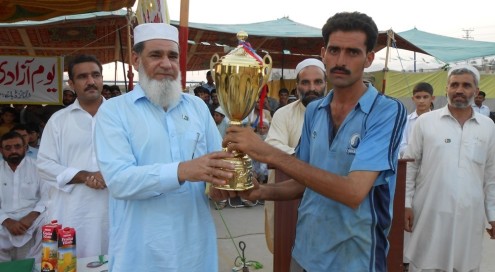 GHALLANAI, August 20: A volleyball tournament, which had started in Mohmand Agency headquarters Ghalanai on the occasion of Independence Day, has concluded.

A total of 16 teams participated in the event. The Shaida Haleemzoo Club beat Abdullah Yakaghund Club in the final match.

The tournament was sponsored by the political administration and organised by Mohmand Volleyball Association.

Additional Political Agent Mr Abdul Hameed and other officials of the political administration distributed prizes among the players at the end.

On the occasion, the players demanded immediate renovation of the Ghalanai Sports Complex.