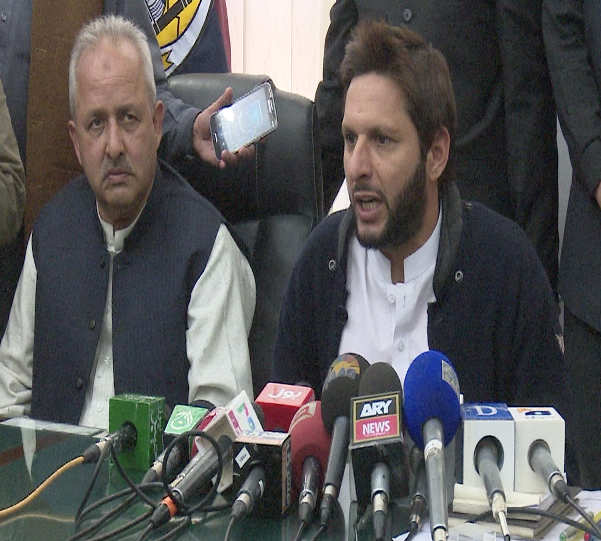 PESHAWAR, 25 December: Star all rounder and former T20 captain Shahid Afridi has said he will not request the Pakistan Cricket Board for a farewell match.

Talking to media persons here at the closing ceremony of a cricketing event organized by the Peshawar Zalmi at Islamia College Peshawar, Afridi said he had earned lots of respect and admiration from the people and he did not need to request PCB to give him a farewell match.

Shahid Afridi also spoke about talent in Fata and KP players. “There is no lack of talent in players of Fata and KP. The only problem is they do not have proper facilities. We need to provide facilities to the players to bring the hidden talent to the fore,” Afridi said.

He said that law and order situation in KP was improving, adding he would strive to facilitate the players of war-affected areas through the platform of Peshawar Zalmi.

“One of the objectives behind establishing Peshawar Zalmi was to provide opportunities to the players of war-affected areas and polish their hidden talent,” the veteran cricketer said.

Vice chancellor, Islamia College University Professor Dr. Habib Ahmad briefed the national cricketer about the history of the college and its upgradation to university. He also presented portrait of the college to Shahid Afridi.

A tug of war match was also held between the players followed by a cycle rally, which started from Islamia College and ended at Tehkal. Male and female cyclists participated in the cycle rally.