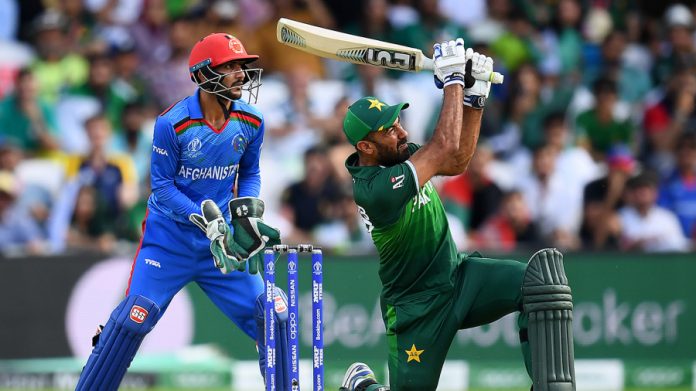 PESHAWAR: Pakistan defeated Afghanistan in the most thrilling match of the ICC World Cup by three wickets at Leeds on Saturday.

Afghanistan decided to bat first on a good pitch and scored 227 runs for the loss of nine wickets. Asghar Afghan and Najeeb Zadran scored 42 runs each while Rahmat Shah scored 35 runs.

For Pakistan Shaheen Shah Afridi was the pick of bowlers who took four wickets, Imad Wasim and Wahab Riaz took two wickets each and Shadab Khan took one wicket.

Pakistan were in trouble chasing the target and they were 167 for the loss of six wickets at one stage and the situation looked extremely bad for Pakistan. However, Imad Wasim held his nerve and surpassed the target in the penultimate over. Imad remained unbeaten on 49, while Babar Azam scored 45.

Imad Wasim was declared player of the match due to his brilliant all-round performance.

The encounter between Pakistan and Afghanistan also saw clashes erupting between fans from both the sides in Leeds. A number of videos have surfaced on Twitter showing the clashes which are reported to have happened during the 1st half of the game. Some people were also evicted from the Headingley Cricket Ground. Those evicted reportedly continued the melee outside the stadium and a few journalists who were trying to film the scenes were also allegedly harmed. There were reports of fans entering the stadium illegally and occupying seats.

Pakistan captain Sarfraz Ahmed thanked the crowd for overwhelming support to Pakistan team. “Thanks to the crowd, they cheered us all the way. It is a great win for us. Not an easy pitch to bat on, but credit goes to Imad – the way he batted, the way he handled pressure, hats off to him,” he said. Sarfraz said Shaheen Afridi is improving day by day, he’s working very hard. “The other bowlers also bowled really well. All are in good nick,” he said.

Afghan skipper Gulbadin said his team missed an opportunity to win the match. “But credit goes to Pakistan. Imad played really well and Shadab gave him the strike well. We’re playing these kind of teams, so you’ll face these situations,” he said.