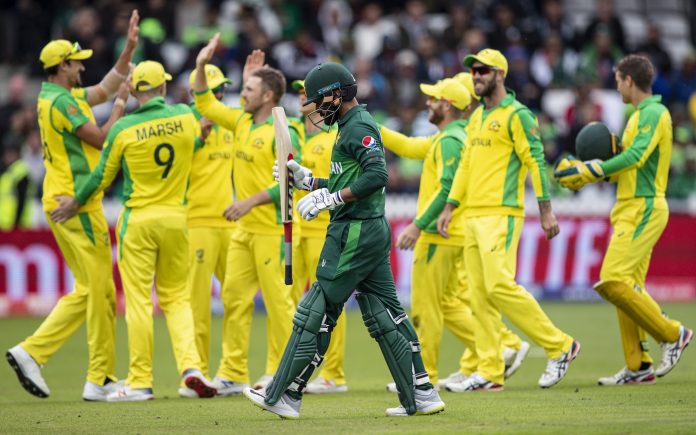 PESHAWAR: After many twists and turns, Pakistan lost a crucial match of the ICC World Cup against Australia by 41 runs at Taunton on Wednesday.

Pakistan chose to field first on a green track, but could not get early advantage as the Australian openers batted well and laid a solid platform. At one stage, it looked like Australia will surpass 350 runs easily, but Pakistani bowlers staged a good comeback in the last overs and restricted them to 307 all out in 49 overs.

David Warner was top scorer for Australia with 107 runs, while skipper Aeron Finch scored 82. Apart from the fact that Australia openers batted well, they also rode their luck as there were at least four dropped catches by Pakistani fielders. Had Pakistan taken that catches, Australia could have been restricted to well below 300.

However, in the end Pakistani pacers, especially Mohammad Amir, staged comeback and restricted the middle and lower order batsmen. Mohammad Amir had a wonderful day with the ball when his other colleagues were going for plenty. He took five wickets and conceded just 30 runs in his quota of 10 overs. He said after the match that he would have been happier had the team won the match.

Pakistan initiated their chase with big trouble as opener Fakhar Zaman was out for zero. Babar Azam contributed 30 after which Imam-ul-Haq and Hafeez had a brilliant partnership, but after that the middle order witnessed a huge collapse. Imam scored 53 and Hafeez scored 46 and set a platform, but Shoaib Malik was out for duck and Asif Ali contributed only 5 which worsened the scenario. Then came Hasan Ali who smashed 32 of 15 balls. After his departure came Wahab Riaz who smashed 45 off 39 and rekindled Pakistan’s hopes. Skipper Sarfraz Ahemd also fought till the last moment and scored 40.

In the end, Pakistan fell short by 41 runs, but the match was much closer and sensational than the scoreboard figures suggested. Pakistan squandered their chance of consolidating their position and lost the match due to their own mistakes. Four catches were dropped and most of Pakistani batsmen were out over poor shot selection.

After Wednesday’s loss, Pakistan now languish at eighth positon on the points table, while Australia have climbed to second position.