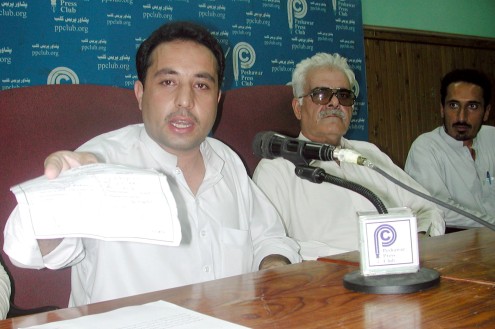 Addressing a press conference at the Peshawar Press Club, several affectees of the military operation told said that the Pakistan Army had issued them written permission to use their  non-custom paid vehicles while they were vacating their native areas before the start of military operation Zarb-e-Azb.

“We are in trouble now authorities have launched crackdown on non-custom paid vehicles, despite the army’s permission to use them. Four days ago, they seized about 15 vehicles near Kohat customs house after women and children onboard were made to disembark. Also, the police and customs officials replace genuine parts of our vehicles and sell them in market to earn money. ”

However, the police have rejected the allegations of the IDPs and said that they neither take bribes from them, nor confiscate their non-custom paid vehicles.