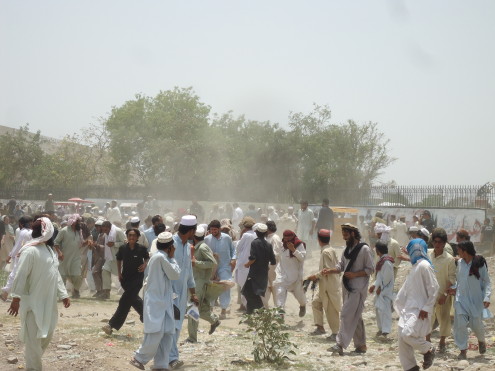 BANNU, August 11: Internally displaced persons (IDPs) clashed with the police in front of a food distribution centre in Bannu.

In-charge of the Saddar Police Station, Mr Yaseen Kamal, told TNN that the police were asking people to line up for food distribution at noon and to control the disorder when the IDPs started throwing stones on the cops on Kohat-Bannu road.

The police then fired shots in the air to disperse the IDPs.

DSP suspended: Meanwhile, the Inspector General of Police Nasir Khan Durrani has suspended a deputy superintendent of police in Bannu.

According to a statement from the district police officer, Mr Nasir Durrani suspended DSP Sardar Khan for poor performance and having relations with criminals. The IGP also ordered a departmental inquiry against him.