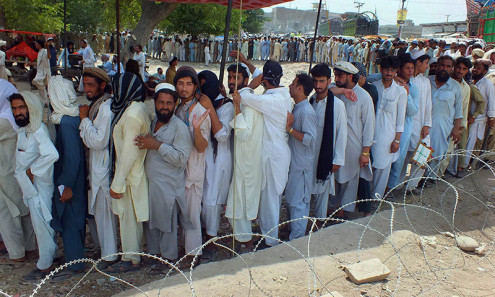 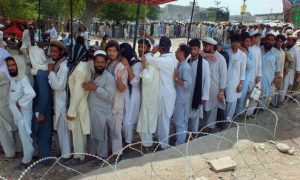 On first day, residents of Miranshah, which is agency headquarters of North Waziristan, were registered. The Fata Disaster Management Authority says 16 desks were set up at the Commerce College in Phase-7, Hayatabad, including 12 desks for men and 4 for women.

The FDMA said mobile phone SIMs were also being provided to the IDPs, through which 40,000 rupees each would be given to them.

One of the IDPs told TNN, “We came here at 5am but here you can see the crowds, with no seating arrangements for the women, children and men.”

Another man said, “Registration process is very slow; we have not been registered till now. We request the government to increase the registration centres for IDPs.”

The registration process was finished at 1pm, instead of 3pm as scheduled, due to a clash between the IDPs and administration.

The registration process will resume at 7am on 8 July. The displaced families, however, said the arrangements for registration were inadequate.