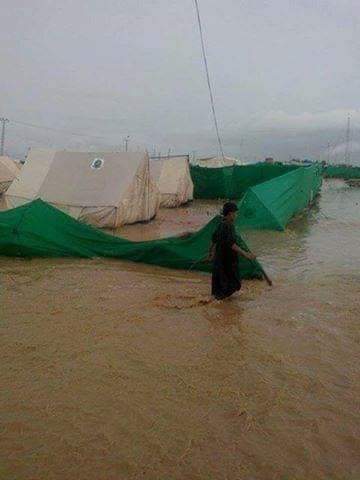 After 24 hours of heavy rains, water has accumulated around the tents on the premises of Internally Displaced Persons camps in Mohammad Khawaja camp in Hangu and Baka Khel camp in Bannu.

The IDPs tents are already torn out due to years of use and scorching heat of summer and unable to cope with hours-long heavy rains due to which most of the IDPs families are lying under the open sky. All the routes leading to camps are closed by rainwater due to which they are unable to purchase the daily use items from the market. The IDPs family informed media that the dry wood, they were using as fire fuel can no more be used in the rainwater.

The IDPs families said that they are under severe problems and asked the government to help them in this difficult situation.

The families said that they have trapped inside the camps, while their foodstuff has come to an end and they are worried about their children. An IDP family told the TNN that the roof of his only mud-made room has already collapsed and now they have covered it with plastic. He added that due to cold weather his children are suffering from different diseases and he is unable to purchase medicines. He asked the government to provide them with support in this difficult situation.

As many as 92 families comprising 700 individuals are residing in the camp, which was established after militants took control of Orakzai district and the army launched operation against them.

Most of them were repatriated, but some remaining families were reluctant to return complaining about lack of seed money required for staring fresh business. They regretted that the grant being given to them for conveyance and three-month ration was not enough. They demanded cash for repair and construction of their houses which were blown up by the terrorists.

When contacted, assistant commissioner Shahid Rafique Gandapur said that he had visited the camp to assess the damage caused to it during the rains. He said that he had ordered the relevant departments to prepare a report and provide every necessity to the IDPs.

Adviser to Chief Minister and Spokesperson for Khyber Pakhtunkhwa Ajmal Khan Wazir in January has said all-out efforts will be made to resettle the IDPs of Bakakhel camp in their native areas during the months of March and April. Wazir has claimed that every possible help and assistance would be extended to the IDPs in their resettlement, however, so far no concrete efforts have been made in this regard.