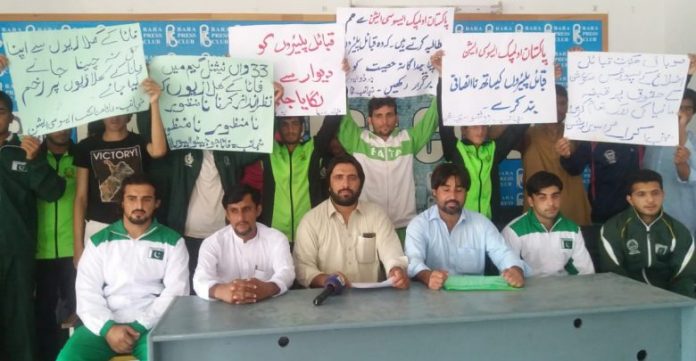 BARA: The office-holders of the former Fata Judo Association have expressed disappointment over being side-lined ahead of the 33rd National Games.

Addressing a press conference at Bara Press Club on Tuesday, Fata Judo Association General Secretary Noor Shah Afridi and other office-holders said the sportsmen of tribal districts are facing uncertainty after abolishment of Fata Olympic Association. They said injustice was being committed with the players of tribal district with such steps.

The participants of the press conference were also holding placards inscribed with slogans in favour of their demands. The placards read that injustice with the players of tribal districts must come to an end and their separate identity must be maintained in the National Games. The placards read that the players of tribal districts were ignored in the national games which is unacceptable.

The Judo Association members warned that the government must stop pushing the tribal players to the wall.

The 33rd National Games, a biennial spectacle, will be held in Khyber Pakhtunkhwa from October 26 to November 1. Preparations for the mega event are underway. KP will host the Games in Peshawar, Charsadda, Mardan and Abbottabad.

Three days ago, KP Olympic Association President Syed Aqil Shah said in a statement that efforts are being made to resolve the issues of judo, cycling and athletics bodies. Aqil Shah claimed that the judo issue has been resolved in KP and Pakistan Judo Federation’s (PJF) president Col Junaid Alam is trying to resolve it in other provinces too.