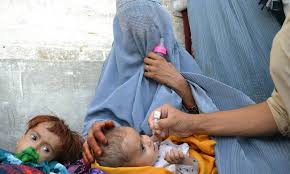 PESHAWAR: Pakistan to start immunization of every individual enters the country against poliomyelitis at Torkham border from March 25. The decision was made on Friday with the aim to prevent the transmission of poliovirus from the neighbouring country into Pakistan.

Captain retired Kamran Ahmad Afridi, the coordinator of Khyber Pakhtunkhwa emergency operation centre said that the vaccination will not be limited only to under five-year-old children but every individual who crosses the border into the country will be immunized against polio at Torkham gate.

Kamran said that now they are very near to eradicate the virus from the country and both the government of Afghanistan and Pakistan has expressed the agreement to start the service at Torkham gate to stop the cross border dissemination of poliovirus. Kamran said that though the polio virus mostly affects the children under the age of five, however, the elders are a source of spreading of the virus from one area to another. That is why; it was decided to also immunize the elders against poliovirus. “The will prove to be a positive step towards the complete eradication of poliovirus,” remarked Kamran Afridi.

The officials have made all the arrangements for the deployment of polio transit teams and social moralizers at Torkham Gate, who will start their work on March 25. As per the official details, on a daily basis, some 14,000 people cross the Torkham border. The government officials expressed the hope that the vaccination of every person will not only ensure a free polio Khyber but will also be a mega stride towards eradication the poliovirus across the country.

In September 2018, Poliovirus that originated in the Northern Corridor in Afghanistan – Kandahar and Helmand – has been detected in various Pakistani cities including Rawalpindi. Emergency Operations Centre for Polio Eradication has said the virus has been detected in Peshawar and other cities in Khyber Pakhtunkhwa as well. The emergency operation centre of polio eradication said that this shows that there is a threat because of the virus, which is travelling with people from Afghanistan to Pakistan and there is a need to stop.