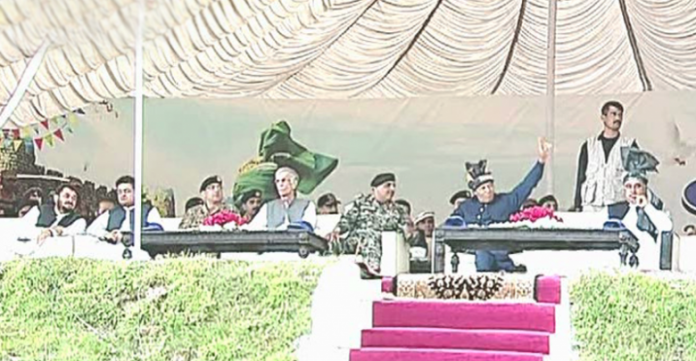 Tirah Valley: Prime Minister Imran Khan has attended the last day of week-long Sports Gala held in Tirah valley on Thursday. The is the first visit of any high profile official of the country has visited the area.

Till then, the area was a no go zone due to continues militancy and violence in the region. The celebration of the cultural and sports gala in this regions tells about the revival of peace and security to the region.

The Prime Minister is on the visits of tribal districts as the election commission of Pakistan is going to announce election schedule in the tribal region for 16 Khyber Pakhtunkhwa assembly seats.  The premier has already held political rallies in Jamrud, North Waziristan, Bajaur tribal districts.

Besides the premier Imran Khan, federal defence Minister Pervez Khattak and other high officials were also present on this occasion. The PM in his speech expressed that the festival is itself an evidence of the revival of peace in the area that had otherwise been badly hit by terrorism before being purged by the security forces.

A contingent of Frontier Corps (FC) presented salute to the PM. The premier also awarded trophies among winning teams and players who showed outstanding performance during the week-long event.

The Sports Gala was titled “Bagh-e-Aman” festival was arranged by the districts administration, which featured different sports events besides the performance of traditional FC bands, national songs by schoolchildren, horse dance that amused the huge audience at the venue.