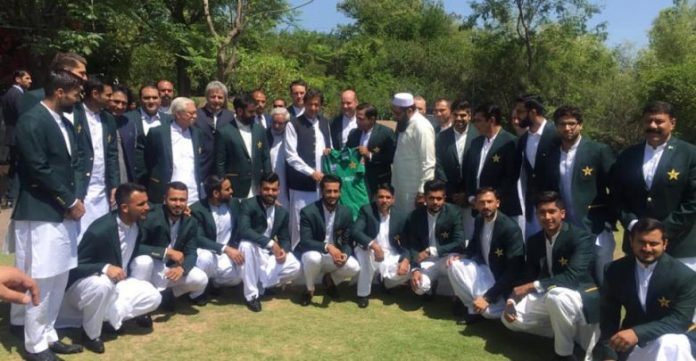 PESHAWAR: The Pakistan cricket team selected for the upcoming World Cup 2019 along with team management and PCB officials met Prime Minister Imran Khan at the Prime Minister House on Friday.

The prime minister, who was captain of the Pakistan team when they won their only World Cup back in 1992 by defeating England by 22 runs at the Melbourne Cricket Ground (MCG) in the final, shared valuable tips and his past experiences with the players. He shook hands with all members of the team to boost their morale. He also took photos with the players and officials. He said despite the fact that conditions in England will be difficult, but the Pakistan team have the capability to defeat any team there. He said he expects the Pakistan team to play with great spirit and enthusiasm in the mega event.

Imran Khan asked captain Sarfraz Ahmed to lead the team from the front as his performance matters a lot in big matches. He gave an hour-long lecture to the players and shared with them his World Cup 1992 experiences. It is understood that, Sarfraz Ahmed has decided to play at No.5 in the World Cup matches.

Imran Khan said people in Pakistan follow cricket with great enthusiasm and they have great hopes from their team. He said he was confident that the players will make their nation proud by their good performance and sportsman spirit.

Pakistan will leave for England on 23 April to play in a one T20 and five one-day matches against England, beginning 5 May. Pakistan will then face Afghanistan and Bangladesh in the warm-up matches before opening its World Cup campaign against West Indies on 31 May at the Trent Bridge.