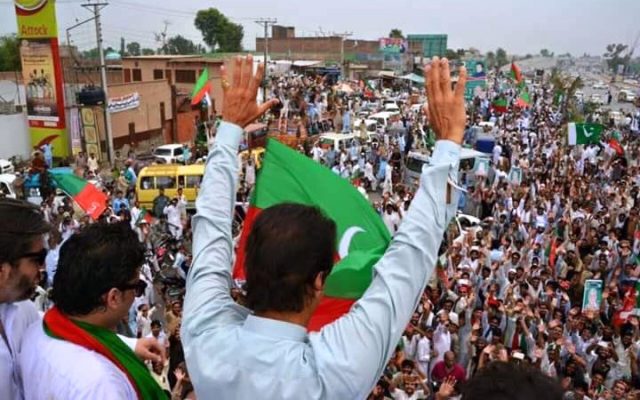 PESHAWAR, 8 August: The Pakistan Tehreek-e-Insaf (PTI) chairman Imran Khan has announced to hold next rallies for investigation against Prime Minister Nawaz Sharif over Panama Leaks in Rawalpindi and Islamabad.

The first anti-corruption rally led by Imran Khan started from Peshawar on Sunday and concluded in Khairabad area of Attock in the night. The PTI chief addressed the crowd at several points and criticised the federal government. He said he has been left with no other option but to come on roads for the rights of people. He said the protest will continue till justice is provided to people.

Mr Khan said the PTI will hold next Tehreek-e-Ehtesab (movement for accountability) rally on 13 August in Rawalpindi and on 14 August in Islamabad.

Meanwhile, the prime minister’s adviser Amir Muqam criticised Imran Khan and Khyber Pakhtunkhwa Chief Minister Pervaiz Khattak for staging protests against the Centre to hide their own inefficiencies in KP.

Addressing a rally of the Pakistan Muslim League-Nawaz (PML-N) workers in Peshawar, Amir Muqam said one has to serve the masses to become a prime minister. He said one cannot become prime minister by making noise and staging sit-ins.