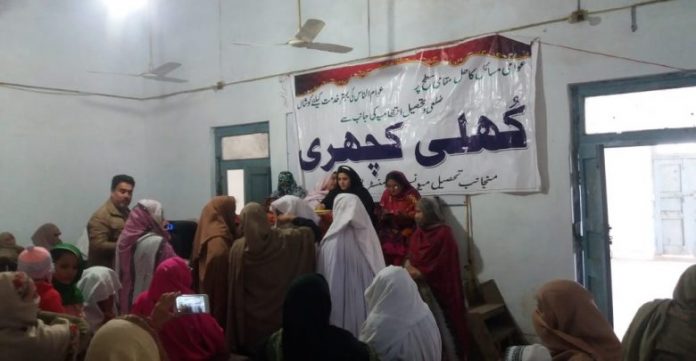 PESHAWAR: For the first time in the history of Tehsil Pabbi, Kuli Kacheri (open court) for women was held to hear and resolve their issues. The Kuli Kacheri was organised by Assistant Commissioner Halima Obaid on the directives of Deputy commissioner, Nowshera on Friday.

On this occasion, women complained about the prevailing sanitation situation, filling of vacant posts in schools, gas problem, lack of health facilities and medicines, buildings for schools, sanitation problem in villages and other issues.

Assistant Commissioner Pabbi said that it was a good day for the women of Tehsil Pabbi, Nowshera that all the administrative officers are sitting in front of them and listening to their problems. She added that that the district administration of Nowshera will resolve problems faced by women on a priority basis.

During the hearing, some issues even were resolved on the spot and some were referred to concerned officers with the assurance that it would be resolved without further delay.

It is to be noted that yesterday, for the first time in the history of Mardan, Assistant Commissioner Mardan Gul Bano organized an open court hearing for women, in which women raised complaints about education, Tehsil Municipal Administration (TMA) Mardan, health department and other departments. Women informed that handicrafts centres under the TMA providing them with a monthly salary as low as Rs 2,500 and said that this era of inflation it is not enough for them to run their home. They requested AC to increase their salary by the proportion of rate inflation.

They further complained that poor women in handicrafts centres are being trained to meet the modern requirements but they face many problems due to lack of logistic support.