Home KP In Chitral patients are advised not to come to hospital after 8:00pm
Facebook
Twitter
WhatsApp
Email 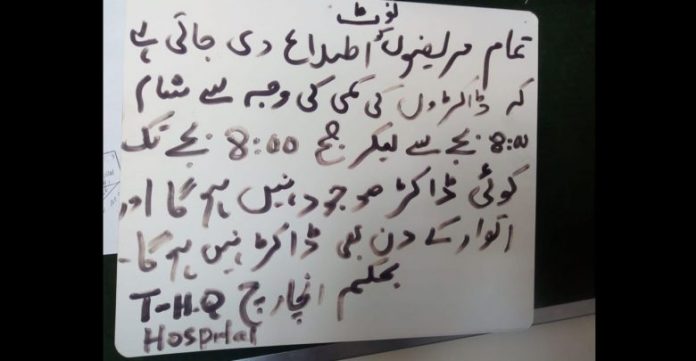 CHITRAL: Patients are facing problems due to shortage of doctors in the Tehsil Headquarters Hospital Booni in Upper Chitral.

The disappointing situation at the hospital can be gauged from the fact that the hospital in-charge has displayed a notice outside the hospital which reads that no doctor is available during night shift and on Sunday, therefore, patients should not come to hospital after 8:00pm and before 8:00am.

Ahmed Hussain, a resident of Booni, said while talking to TNN that his son Ammad Hussain, who is a student of sixth grade, complained of severe pain in his stomach after which he rushed him to Booni Hosptial. He said his son was admitted to hospital in the night, but no doctor came to check his son the whole night and his son remained in extreme pain.

Ahmed Hussain said he had no option, but to shift his son to District Headquarters Hospital Chitral the next day. He said that as soon as he reached DHQ Hospital Chitral, his son was diagnosed with appendix and surgery was performed on him in the evening. He said the doctor told him that had he been late by another hour, his son could have died.

Ahmed Hussain said the provincial government, which often make tall claims of bringing reforms in the health sector, has failed to address the problem of shortage of doctors. He said there are only three doctors in THQ Hospital Booni who go to their houses in the night. He said no doctor is available for night shift due to which patients face difficulties. He said he could have lost his son had he not decided to shift him to DHQ Hospital Chitral.

The residents of Booni have demanded the provincial government to upgrade the Booni Hospital. They said only three doctors are serving in the hospital which should have at least 11 doctors. They said there is no lady doctor in the hospital due to which women patients also face difficulties. They said may people prefer to get expensive medical treatment at private clinics and hospitals due to lack of facilities at the government hospital.