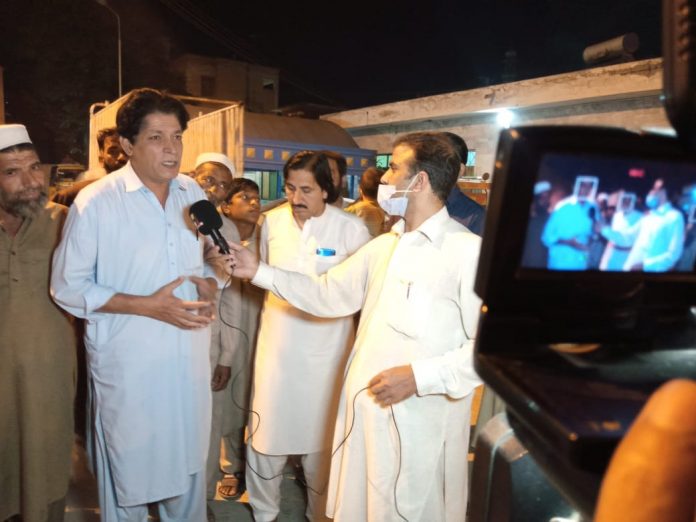 PESHAWAR: As International Press Freedom Day is being celebrated worldwide today, a recent report released by Reporters Without Borders (RSF), an international media watchdog, ranked Pakistan as a country of concern for freedom of the press.

The RSF reviewed the situation of press freedom in 180 countries in which Pakistan has been ranked 145th regarding the Freedom of Press.

Likewise, the information obtained, so far, includes that in 2021 the incidents of killing of the journalists, murder attempts, and legal proceedings against journalists in the country have also been reported.

On 17 March, Ajay Kumar Lalwani, the Reporter of a private TV channel named Royal News, who belonged to a minority community in Sindh province, had been killed by unknown people.

On 20th April, in the capital of Pakistan, Islamabad, a renowned journalist and Pakistan Media Regulatory Authority’s (PEMRA) ex-chairman, Absar Alam, was shot and injured by unknown people. Absar Alam had been threatened previously for criticizing the PTI led government and Pakistani military.

In district Lakki Marwat of Khyber Pakhtunkhwa a trial against a journalist named Ghulam Akbar Marwat, had been registered for exposing the truth about the corruption of the government department, in which his bail application was accepted by a court on 22 April. Whereas on the 24th of the previous month in the province of Balochistan, Azadi Newspaper’s reporter Abdul Wahid Raeesani was shot dead by unknown people.

Every year, 3rd May is being celebrated by the United Nations as freedom of Press all over the world, for the sole purpose of reminding the states that access to journalism and information is the basic human right. But access to free media and information is distant dreams for many countries including Pakistan.

The Media Matters for Democracy, an NGO working on expression and democracy in Pakistan, last month released its annual research report in 2020, which gave Pakistan a score of 30 out of 100. According to the report, the year 2020 was a difficult year for Pakistani journalists and commentators.

As per the said report, at least eight media workers have been killed in Pakistan during the year with the Corona epidemic, while 36 journalists were attacked on duty and 10 were arrested this year.

According to the report, 23 cases have been registered against journalists while women journalists have been subjected to online attacks, but the Pakistani government denies the ban on free expressions in the country and claims that it believes in freedom of expression.

But on the other side, media watch dog organizations advocating for safety of journalists journalism and free expression rejecrt these claims by the government in their research reports.

The Freedom Network, a Pakistani NGO that advocates for freedom of the press and the rights of journalists, claimed in a report released last year that Pakistan’s Prime Minister Imran Khan chaired 62 meetings of the federal cabinet from September 1, 2018, to January 30, 2020.  But not a single meeting has discussed the protection of journalists and the prevention of incidents against them.

If we look at the rate of trials, murders, attempted murders, kidnappings, violence, and threats against journalists in Pakistan, it is estimated that the rate of these crimes has increased during PTI government.

Media is considered to be the fourth pillar of the state and democracy is supposed to prosper through it. However, some people in the PTI government agree that free media is the cause of strengthening democracy.

Recently, Federal Minister for Information Fawad Hussain Chaudhry had said regarding the welfare of journalists that journalists have served the country and the nation and they will be given not only private houses by the government but never once did he talk about the safety of journalists and their economic well being.

Journalists in Pakistan have heard similar announcements and claims before, but these claims have not been put into practice.

The Ministry of Human Rights last year introduced a bill to protect journalists and media workers but after all this time, the bill has not been brought into practice. The proposed bill offered an empowered seven-member committee to be headed by a former judge of the Supreme Court of Pakistan, and the same commission would investigate incidents of harassment, repression, violence, and intimidation against media representatives within 14 days.

If this bill had been passed and implemented with sincerity and good intentions, press freedom index in Pakistan would have been much better this year.