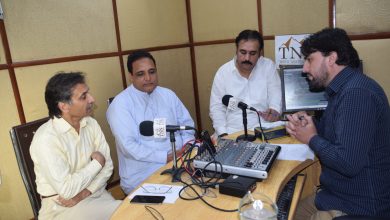 PESHAWAR: The government’s move to constitute a task force for implementation of Fata reforms has got appreciation from different quarters, but at the same time, the inclusion of some members, who remained opposed to the merger of tribal areas with Khyber Pakhtunkhwa, in the task force, has raised eyebrows.

Some people have expressed apprehensions that the government may not be able to implement the reforms agenda with this kind of a task force. The Awami National Party (ANP) Fata leader Nisar Momand, eminent journalist and analyst Ashraf Ali and Pakistan Tehreek-e-Insaf (PTI) senior leader of southern districts Naseer Wazir expressed their views about the prospects of the task force in a panel discussion arranged by TNN.

Ashraf Ali said the task force is a technical body which will forward recommendations. He said the formation of a committee was inevitable as merger is not possible with just an announcement. He said although some anti-merger people have been included in the task force, but still majority of them are pro-merger like the KP chief minister, governor, MNA Iqbal Afridi and Arbab Shahzad.

Ashraf Ali said the merger process is facing a lot of challenges. He said the main challenges include the proper utilization of funds under the National Finance Commission (NFC) Award, future of Levies Force and separation of powers in the institutions. He said the task force will present recommendations to the government about all these issues.

Nisar Momand said local government elections should be held in the tribal districts before the provincial elections to transfer the powers to grassroots level. He said the government should immediately tackle the technical issues of the merger and focus on providing basic facilities to the people of tribal districts.