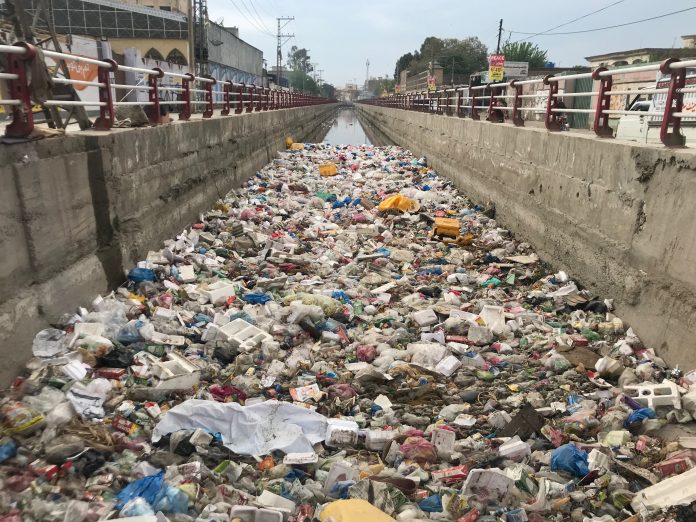 PESHAWAR: The word plastic is derived from the Greek word ‘plastikos’ which means ‘ability to shape and mould into different shapes and forms’. Plastics are made up of natural, organic material like cellulose, coal, natural gas, salt and crude oil.

Plastic pollution is one of the prime and alarming issues in Pakistan as its contribution is penetrating into all branches of human activities including water bottles, chairs, tables, beverage containers, plastic bags, straws etc.

Our life has now got plasticised as it makes our life simpler and helpful on the ground that plastic sacks are simpler, strong, available and modest. In Pakistan today, everybody is eating in plastic utensils, plastic containers are utilised for drinking, plastic dishes are used for food stockpiling and other shopper products.

Despite the fact that plastic has been utilised practically in the entirety of the items however the wide scope of plastic is being utilised in the form of plastic bags. Polythene bags are most regularly utilised for staple goods, shopping, and to dispatch different items. The expanding use of polythene bags widely affects the environment and severely impacts climate, society and human wellbeing.

Plastic bags cause genuine ecological peril to human beings and other creatures. This requires several years to break down and if plastic bags are appropriately removed, these can effect climate by causing littering and storm water channel blockages. When plastic bags are burnt, they eventually break down into the soil and release toxic chemicals which result in choke and death of animals.

Due to their shape and size, numerous marine animals succumb to these plastic packs through ensnarement and ingestion. People are additionally influenced by the antagonistic effects of plastic bags consistently as the manufacture also use cancer-causing chemicals such as benzene and vinyl hydrochloride which pollute our air, water and soil.

Most purchasers know about the issues with contamination that plastic bags cause. Furthermore, a large number of people search for more alternative options.

There are many approaches to beat this issue, first of all we can recycle the plastic bags used on a daily basis; secondly we should begin to diminish the measure of plastic bags that are burnt; and thirdly one can discourage plastic utilisation as an individual.

Reusable bags have a huge number of advantages and can likewise serve as an ice breaker. As an ever increasing number of individuals start carrying their own shopping bags with them, it will make social mindfulness about the issue.