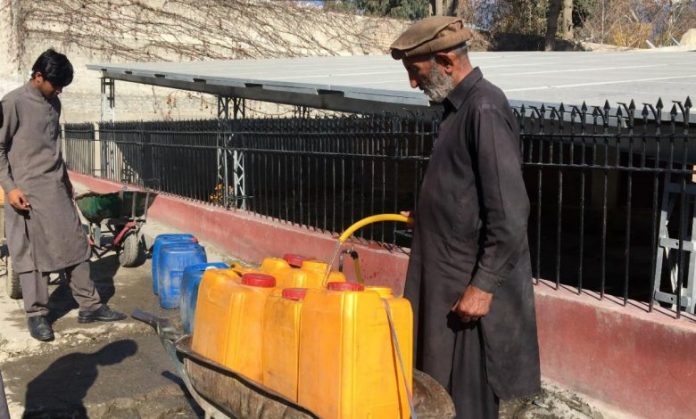 PARACHINAR: Despite existence of 22 tube wells and clean water from streams and Kurram River, still a sizable population of Parachinar, Kurram tribal district, is deprived of facility of clean drinking water.

There is no dearth of clean drinking water sources in the district headquarters, but the problems lies in the supply system. There are a lot of streams around the city and 22 tube wells have also been set up in different areas. The Town Committee of Parachinar was established in 1958 and two big pipelines were laid in Zeran and Malana in 1960 to supply water to the city. Two big reservoirs of 30,000 gallons each were set up in Parachinar and pipelines have also been spread in the city to supply clean water to the citizens.

Despite all these arrangements, the available clean water is not enough to meet the requirements of the city people mainly because of it increasing population.

According to official data, the population of Parachinar city is 39,699 with 3,712 households. The construction of new houses and buildings for business purposes is underway with a rapid pace in and around the city, while there is no arrangement for water and electricity supply for the new constructions.

Tanveer Hussain, a resident of Parkhu area of Parachinar, told TNN that he constructed his house in the area eight years ago, but still clean drinking water supply is missing. He said water supply connection is not being given to his area despite existence of tube wells. He said this situation has compelled the area people to get illegal water connections from the main supply line coming to the city from Zeran. He said the Town Committee swings into action from time to time to cut illegal water connections, but influential people are not touched.

Senior journalist Ali Afzal said connections from tube wells in Parachinar are mostly given to influential people. He said most tube wells are under the occupation of few people, due to which the long standing problem of water shortage remains unresolved.

Sajid Hussain, a resident of Khwar Colony, told TNN that there are three tube wells in the area the water of which spoils in nullahs on daily basis, but it is not being given to the area people. He said after getting up in the morning, he brings water to home before going for work. He said water tanker is available for Rs1,000 which beyond the affordability of the poor people.

Parachinar Town Committee Officer Tanzeel Hussain said increasing population and illegal connections are the main reasons behind shortage of water supply in Parachinar. He said work on establishment of new tube wells in process which will resolve the problem to a great extent.