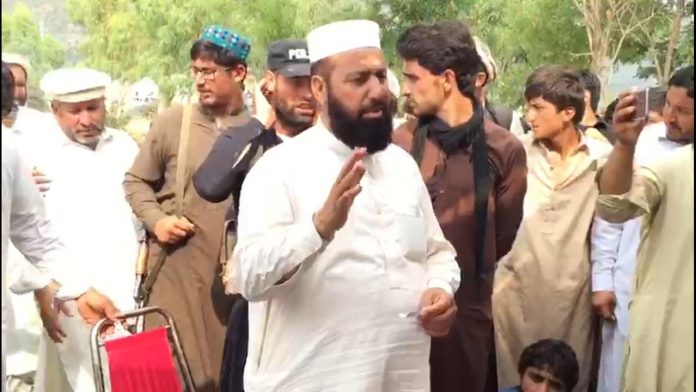 KURRAM: Another independent candidate in district Kurram has started protest alleging that July 20 polls on PK-108 were rigged.

The protest is started by Saifullah Chamkani who has contested polls on PK-108 Central Kurram as independent candidates but lost with 6161 ballots against the 11958 votes of Riaz Shaheen, a candidate of Jamiat Ulema Islam-Fazal.

Chamkani has stated protest in Bad Ama area of Kurram district where he was also joined by a number of tribal elders. “I have been defeated through rigging that has been carried out through an organised strategy on the Election Day,” Saifullah said while addressing the gathering.

On PK-108, Riaz Shaheen of Jamiat Ulema Islam Fazal has received 11958 votes, an independent candidate Malik Jamil has recently 11516 votes while the protesting candidate Saifullah Chamkani has got 6161 votes and was on the third.

The elections candidates have also submitted an application for the recounting of ballots in PK-108 which is currently continued.

Yesterday, Five independent candidates for PK-109 in district Kurram have alleged that the Pakistan Tehrik-e-Insaf (PTI) candidate has been elected through rigging and that their mandate was stolen through an organized rigging on the Election Day.

The allegations were raised by candidates for PK-109 Inayat Ali Tori, Hashmat Bangash, Engineer Hasan Jamal, Haji Gul Hasan and Haji Hamid Hasan in a joint press conference here at Parachinar press club. Defeated candidates on PK-109 have said that they will never accept the results and will stage strong protests if their reservations were not removed by the government and the election commission of Pakistan.