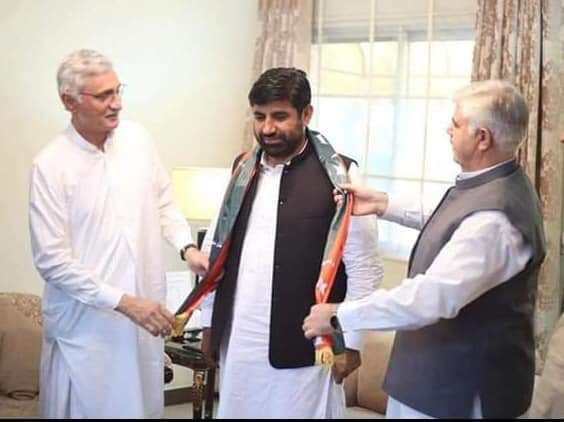 Before the July 25 election, Shafique Afridi was the part of PTI but he was not provided party ticket due to which he contested the election as independently. On PK-107, a total of six candidates including Muhammad Shafique Afridi, Abdul Ghani, Shah Khalid, Zubair Afridi, Gul Madar and Muhammad Javed have applied for party ticket but PTI had granted ticket to Zubair Afridi. Thus, the two disgruntled party workers – Muhammad Shafique and Haroon Afridi– contested election independently.

Shafique Afridi won the election on PK-107 Khyber with 9796 votes. The reasons behind his success were the unconditional support of Aka Khel tribe, withdrawal of nomination papers by Inqilabi league candidate in his favour and the support of several tribal elders.

Similarly, district Khybers’ two other constituencies, PK-105 and PK-106, have been won by Bilal Aridi and Shafique Sher – son and nephew of Alhaj Shaji Gul respectively. Both the MPAs elect were also invited to join PTI, however, Shaji Gul has said they’ve no intention to join PTI. He added that any decision in this regard will be taken in consultation with Al-Haj group workers and elders.

The official statement issued here on Thursday said that the MPA-elect announced joining the PTI after meeting with Chief Minister and Jahangir Tareen. On this occasion, CM also invited remaining independent MPAs-elect from tribal districts to join Pakistan Tehrik-e-Insaf.

“PTI’s doors are open for everyone who wants to play an effective role in the uplift of tribal districts,” said Chief Minister.  He claims that the PTI only aim is to work for the uplift of all the newly merged districts.

The CM welcomed Shafiq Afridi stating that development of newly merged tribal districts is the topmost priority of the incumbent government and joining of independent MPAs would allow them not only to be a part of the ten-year developmental program of KP government but will also allow them to personally monitor and implement the plan.

“Although there are many challenges ahead of us, yet our objectives are clear and we are confident to achieve rapid development of tribal districts.” KP CM said. The Chief Minister added that provincial government is working for providing livelihood opportunities, ensuring effective healthcare services, providing educational facilities, construction of roads, provision of clean drinking water and ultimately putting an end to 70 years of deprivations of the tribal districts.

Indipennded MPA-elect from PK-110 Orakzai Syed Ghazi Ghazan Jamal, who is the son of former member National Assembly Ghazi Gulab Jamal, has also held a meeting with the CM but Jamal has not yet announced joining any political party.

In the first-ever election, for the KP assembly, in tribal districts, seven independent candidates, five Pakistan Tehrik-e-Insaf (PTI), two Jamiat-e-Ulema Islam-F (JUI-F), one Jamat-e-Islami and one by Awami National Party candidates were elected. The independent candidates have grabbed most of the seats as 92% candidates have to forego the security deposit submitted as they all failed to secure the required votes from the total ballots cast in the constituency.