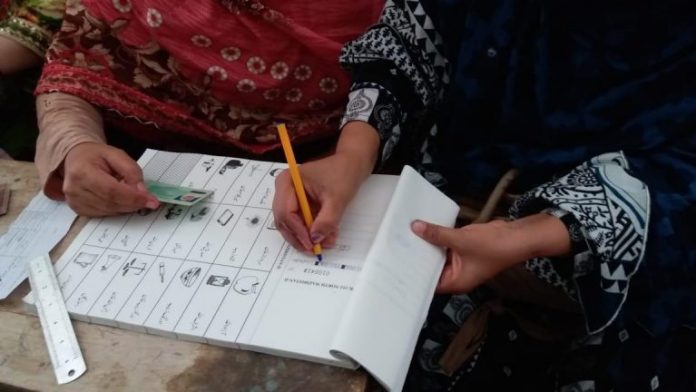 PESHAWAR: The first ever provincial elections in tribal districts were held in peaceful atmosphere with few minor incidents in which independent candidates are leading on six seats, while the ruling Pakistan Tehreek-e-Insaf (PTI) leads on four seats.

Elections for 16 general seats of tribal districts in Khyber Pakhtunkhwa Assembly were held on Saturday in which a large number of people came to cast their votes. However, women’s turnout was low in some areas as they were barred from voting under the tribal traditions and in some places they deliberately opted not to vote.

The JI candidates Sahibzada Haroonur Rasheed and Sirajuddin Khan were leading on PK-101 and PK-102, Bajaur. The ANP candidate Nisar Mohmand was having a narrow lead on PK-103, Mohmand followed by the PTI candidate. The JUI-F candidates were leading in PK-104, Mohmand and PK-113, South Waziristan seats.

The elections were held mainly in peaceful atmosphere amid tight security cover provided by the Pakistan Army and other security agencies. Most people in Darra Adamkhel did not vote in protest against merger of erstwhile Fata with KP. However, in other parts of the tribal districts the turnout was good. However, women’s turnout remained low in most parts of tribal districts.