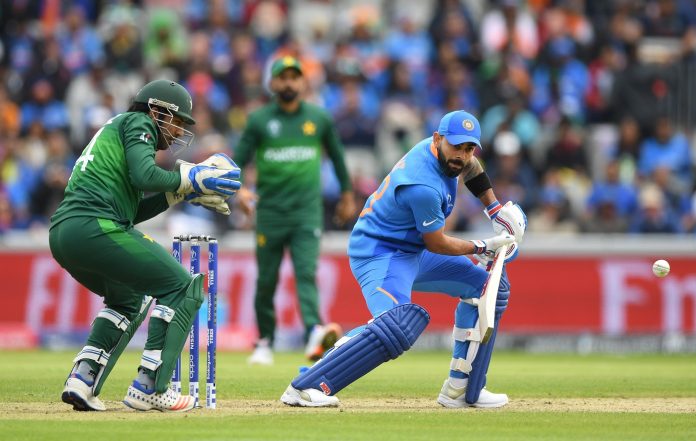 PESHAWAR: On another disappointing day for Pakistan cricket, they lost by a huge margin to arch-rivals India in a crucial match of the ICC World Cup in Manchester on Sunday.

Pakistan after winning the toss squandered the early advantage of bowling first in damp conditions and India had a flying start. India amassed 336 runs for the loss of five overs due to brilliant batting of Rohit Sharma and Virat Kohli who scored 140 and 77 runs respectively. KL Rahul also batted well for his 57.

For Pakistan, Mohammad Amir was the pick of bowlers who took three wickets, while Wahab Riaz and Hasan Ali took one wicket each. Except for Amir and Imad Wasim, all other bowlers went for plenty. Hasan Ali was particularly at the receiving end by conceding 84 runs in nine overs.

Pakistan did not have the best of starts as opener Imam-ul-Haq was out for 7 after which Fakhar Zaman (62) and Babar Azam (48) played with responsibility. But as soon as they got out in consecutive overs, the middle order collapsed. Shoaib Malik was out for a golden duck, Mohammad Hafeez scored 9 and skipper Sarfraz Ahmed scored 12. Then came Imad Wasim and Shadab Khan who were playing with good intent, but the rain arrived and after interruption the target became even steeper. The target was revised to 302 in 40 overs and when the play ended, Imad was playing on 46 and Shadab was playing on 20 and the total score was 212 for the loss of 6 wickets. So Pakistan lost the match by 89 runs under the Duckworth-Lewis method. It was seventh straight loss for Pakistan against India in the World Cup.

Rohit Sharma was declared player of the match for his brilliant century. He said after the match that he was disappointed to get out on 140 as he wanted to score more.

Sarfraz said Pakistan failed to take advantage of a good toss win and allowed India to post a big total. He said the tournament has become even harder for Pakistan and they will have to win all the remaining matches.