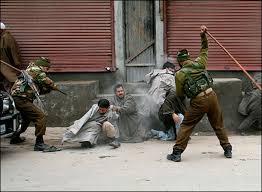 Kashmir Media Service reported that troops killed the youth during a military operation in Tangdhar area of the district.

Meanwhile, a forceful demonstration was held at Press Enclave in Srinagar, today, under the auspices of the Joint Resistance Leadership to press the demand for release of all illegally detained Kashmiris languishing in various jails of the territory and India.

A large number of people including Hurriyat leaders and activists led by Muhammad Yasin Malik also staged a sit-in protest. The protesters were carrying banners with demands for release of political prisoners.

Addressing the demonstrators, Yasin Malik said that India must understand that the Kashmiri freedom-fighters could not be cowed down by abductions, bullets or the police hooliganism. He also condemned the use of brute force by the Indian troops and police on protesters at Jamia Masjid in Srinagar, yesterday.

Complete shutdown was observed in downtown Srinagar, today in protest against the use of brute force by the Indian police and troops on protesters in Nowhatta area yesterday.