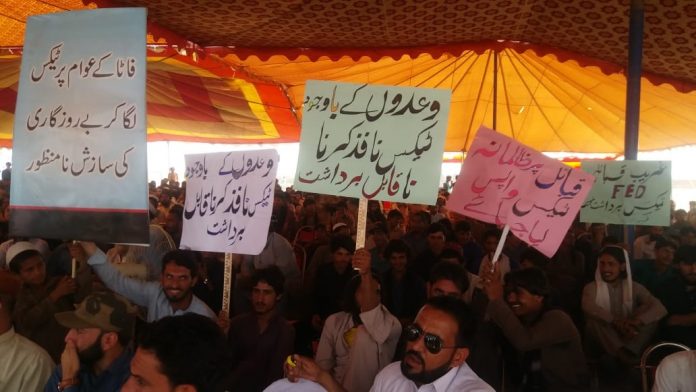 BARA: The industrialists association of tribal districts has set up a protest camp and blocked the road for traffic on Thursday against the imposition of tax on industries situated in tribal districts.

The industrial association has set up a protest camp near Shahid Afridi sports complex where the road from Mattani to Takhta Baig was blocked for traffic. The association said that former FATA has been given relief in federal excise duty as well as all taxes due to its economic backwardness.  Therefore, the federal and provincial government cannot impose such taxes on industries.

The speakers while addressing the protests camp said that the tribal districts are the worst victim of terrorism and militancy that has destroyed its infrastructure. Therefore, the government has announced tax relief for its industries for five years. Several dozens of unemployed workers of different industries and candidates for PK-106 and PK-105 participated in the protest camp.

Later on, the Industries association has delayed the protests till Election Day. The protesters announced that their protest against the harsh measures in the federal and provincial budgets will continue after the election. The delay in the protest has been made with the efforts of member national assembly from Khyber, NA-44 Haji Iqbal Afridi, who assured them that the issue will be raised on the floor of the national assembly.

The protest was postponed for ten days however; the president of Khyber steel mills association has said their mills will remain closed until the government withdraw all the taxes imposed on the steel industry. They said that the federal and provincials government has already announced five years tax remission for tribal districts during the merger of tribal districts with the province, therefore, now new tax can be imposed on industries in tribal districts.

The traders and industrialists have announced to set up a protest camp on Pak-Afghan route after elections that will continue till the government withdraw taxes on industries in Tribal districts.