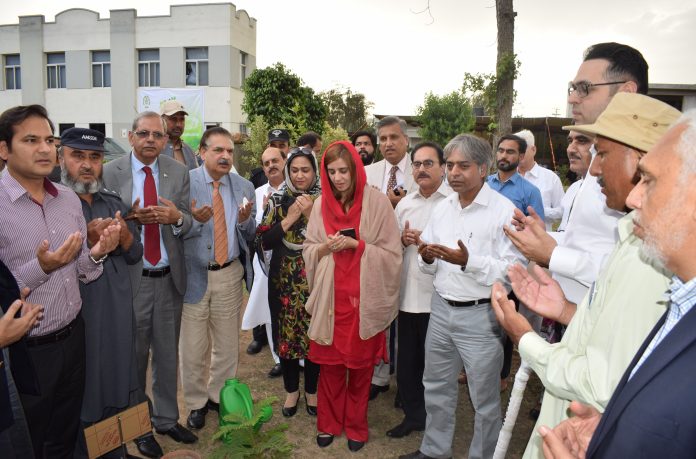 “The incumbent government has been very successful in achieving its objectives in this regard, she said while speaking as chief guest at a plantation ceremony held at Kahuta Triangle Industrial Estate, Islamabad.

According to a press release, Zartaj Gul said industrialists and businessmen have played pivotal role in creating awareness on environment and concepts like green productivity.

The minister of state said that rapid deforestation in the country and untreated waste of industries has substantially polluted the soil, water and air and damaged the environment. She said the present government’s awareness campaign has created impact.

“Only Islamabad Industrial Area I-9, I-10 and Kahuta Triangle Industry has planted over 30,000 plants,” she said, adding that the business community and factory owners have made the minds of employers and workers in creating a pleasant environment, which emphasises the importance of planting trees.

Dr Farzana Altaf Shah, Director General Pakistan Environmental Protection Agency (EPA), who was the guest of honor at the occasion, said that the message of Green Production from Islamabad Industrial Association (IIA) has reached up to Korangi Industrial Area and Mian Akram Farid has been instrumental in this context.

President Islamabad Industrial Association Mian Akram Farid said that we are far behind the developed countries as for as environmental issues are concerned. He stressed the need to maximize renewable energy in the country and minimize generation of electricity based on crude oil and coal etc. He said Pakistan is full of water resources and it must effectively use this resource for irrigation and power generation.

“Pakistan’s forests are only 4 percent of the land whereas 25 percent of the total land needs to be covered by forests for ideal environmental conditions,” he added.

He said the water sector with large dams should exploited through hydroelectric power plants which are environmentally less damaging and viable in Pakistan where there exist more than 250 sites for this. Mian Akram Farid appreciated the efforts of the present government in this regard and said that that the government has addressed this important issue on war footing. All segments of society have responded to this noble drive, he said.